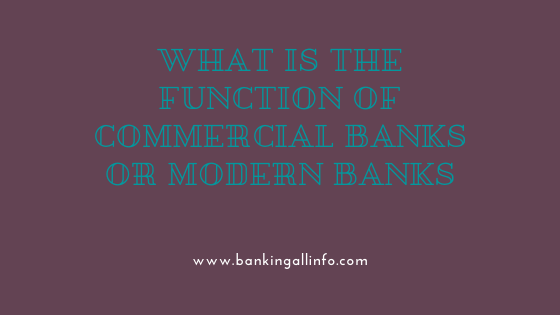 What is the function of commercial Banks or Modern banks: In the modern world, banks perform such a variety of functions that it is not possible to make an all-inclusive list of their functions and services. However, some basic functions performed by the banks are given below:

The first important function of a bank is to accept deposits from those who can save but cannot profitably utilize this saving themselves. People consider it more rational to deposit their savings in a bank because by doing so they, on the one hand, earn interest, and on the other, avoid the danger of theft. To attract savings from all sorts of individuals, the banks maintain different types of accounts:

Money in these accounts is deposited for fixed period of time (say one, two, or five years) and cannot be withdrawn before the expiry of that period. The rate of interest on this account is higher than that on other types of deposits. The longer the period, the higher will be the rate of interest. Fixed deposits arc also called time deposits or time liabilities.

These accounts are generally maintained by the traders and businessmen who have to make a number of payments every day. Money from these accounts can be withdrawn in as many times and in as much amount as desired by the depositors. Normally, no interest is paid on these accounts; rather, the depositors have to pay certain incidental charges to the bank for the services rendered by it. Current deposits are also called demand deposits or demand liabilities.

The aim of these accounts is to encourage and mobilise small savings of the public. Certain restrictions are imposed on the depositors regarding the number of withdrawals and the amount to be withdrawn in a given period. Cheque facility is provided to the depositors. Rate of interest paid on these deposits is low as compared to that on fixed deposits.

The purpose of these accounts is to encourage regular savings by the public, particularly by the fixed income group. Generally money in these accounts is deposited in monthly installments for a fixed period and is repaid to the depositors along with interest on maturity. The rate of interest on these deposits is nearly the same as on fixed deposits.

Home safe account is another scheme aiming at promoting saving habits among the people. Under this scheme, a safe is supplied to the depositor to keep it at home and to put his small savings in it. Periodically, the safe is taken to the bank where the amount of safe is credited to his account.

B] Advancing of loans:

The second important function of a bank is advancing of loans to the public. After keeping certain cash reserves, the banks lend their deposits to the needy borrowers. Before advancing loans, the banks satisfy themselves about the credits worthness of the borrowers. Various types of loans granted by the banks are discussed below:

Such loans are very short period loans and can be called back by the bank at a very short notice of say one day to fourteen days. These loans are generally made to other banks or financial institutions.

It is a type of loan, which is given to the borrower against his current assets, such as shares, stocks, bonds, etc. Such loans are not based on personal security. The bank opens the account in the name of the borrowers and allows him to withdraw borrowed money from time to time up to a certain limit as determined by the value of his current assets. Interest is charged only on the amount actually withdrawn from the account.

Sometimes, the bank provides overdraft facilities to its customers though which they are allowed to withdraw more than their deposits. Interest is charged from the customers on the overdrawn amount.

4. Discounting of Bills of Exchange:

This is another popular type of lending by the modern banks. Through this method, a holder of a bill of exchange can get it discounted by the bank. In a bill of exchange, the debtor accepts the bill drawn upon him by the creditor (i.e, holder of the bill) and agrees to pay the amount mentioned on maturity. After making some marginal deductions (in the form of commission), the bank pays the value of the bill to the holder. When the bill of exchange matures, the bank gets its payment from the party, which had accepted the bill. Thus, such a loan is self-liquidating.

The banks have also started advancing medium-term and long-term loans. The maturity period for such loans is more than one year. The amount sanctioned is either paid or credited to the account of the borrower. The interest is charged on the entire amount of the loan and the loan is repaid either on maturity or in installments.

A unique function of the bank is to create credit. In fact, credit creation is the natural outcome of the process of advancing loan as adopted by the banks. When a bank advances a loan to its customer, it does not lend cash but opens an account in the borrower’s name and credits the amount of loan to this account. Thus, whenever a bank grants a loan, it creates an equal amount of bank deposit. Creation of such deposits is called credit creation which results in a net increase in the money stock of the economy. Banks have the ability to create credit many times more than their deposits and this ability of multiple credit creation depends upon the cash-reserve ratio of the banks.

Banks also render a very useful medium of exchange in the form of cheques. Through a cheque, the depositor directs the bankers to make payment to the payee. Cheque is the most developed credit instrument in the money market. In the modern business transactions, cheques have become much more convenient method of settling debts than the use of cash.

Banks also perform certain agency functions for and on behalf of their customers:

1. Remittance of Funds:
Banks help their customers in transferring funds from one place to another through cheques, drafts, etc.

3. Purchasing and sales of Securities:
Banks undertake purchase and sale of various securities like shares, stocks, bonds, debentures etc. on behalf of their customers. Banks neither give any advice to their customers regarding these investments nor levy any charge on them for their service, but simply perform the function of a broker.

4. Collection of Dividends on Shares:
Banks collect dividends, interest on shares and debentures of their customers.

6. Income Tax Consultancy:
Banks may also employ income-tax experts lo prepare income-tax returns for their customers and to help them to get refund of income-tax.

7. Acting as Trustee and Executor:
Banks preserve the wills of their customers and execute them after their death.

In addition to agency services, the modern banks provide many general utility services as given below:

1. Locker Facility:
Banks provide locker facility to their customers. The customers can keep their valuables and important documents in these lockers for safe custody.

2. Traveller’s Cheques:
Banks issue traveller’s cheques to help their customers lo travel without the fear of theft or loss of money. With this facility, the customers need not take the risk of carrying cash with them during their travels.

5. Underwriting Securities:
Banks underwrite the securities issued by the government, public or private bodies. Because of its full faith in banks, the public will not hesitate in buying securities carrying the signatures of a bank.

7. Acting as Referee:
Banks may be referred for seeking information regarding the financial position, business reputation and respectability of their customers.

9. Safeguarding money and valuables: People feel safe and secured by depositing their money and valuables in the safe custody of commercial banks. Many banks look after valuable documents like house deeds and property, and jewellery items.

10. Transferring money: Money can be transferred from one place to another. In the same way, banks collect funds of their customers from other banks and credit the same in the customer’s account.

12. Automatic Teller Machines (ATM): The ATMs are machines for quick withdrawal of cash. In the last 10 years, most banks have introduced ATM facilities in metropolitan and semi-urban areas. The account holders as well as credit card holders can withdraw cash from ATMs.

13. Credit Cards: Credit cards are another important means of making payments. The Visa and Master Cards are operated by the commercial banks. A person can use a credit card to withdraw cash from ATMs as well as make payments to trade establishments.

What is the function of Treasury front office?