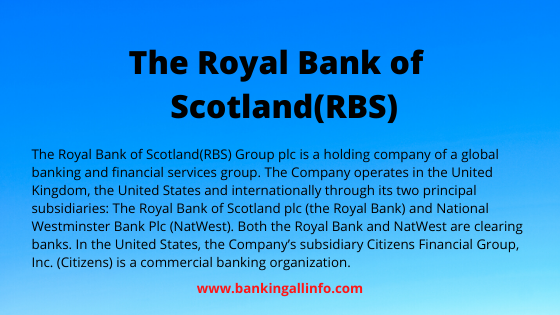 The Royal Bank of  Scotland(RBS)

The Royal Bank of Scotland(RBS) Group plc is a holding company of a global banking and financial services group. The Company operates in the United Kingdom, the United States and internationally through its two principal subsidiaries: The Royal Bank of Scotland plc (the Royal Bank) and National Westminster Bank Plc (NatWest). Both the Royal Bank and NatWest are clearing banks. In the United States, the Company’s subsidiary Citizens Financial Group, Inc. (Citizens) is a commercial banking organization. The Company’s business segment include UK Retail, UK Corporate, Wealth, Global Transaction Services, Ulster Bank, US Retail & Commercial, Global Banking & Markets (GBM), RBS Insurance, Central items, Non-Core Division and Business Services. In May 2012, The Paragon Group of Companies PLC announced the acquisition of further unsecured consumer loans, through its Idem Capital Securities subsidiary, from the Company.
It operates in six divisions: Corporate Markets, Retail Markets, Ulster Bank, Citizens, RBS Insurance, and Manufacturing. The company was founded in 1727 and is headquartered in Edinburgh, the United Kingdom.

The Royal Bank of  Scotland (RBS)

Today’s RBS and its brands are made up of hundreds of past banks. They were all different – large and small, city and country, traditional and innovative – and grew to serve the banking needs of unique communities all over the United Kingdom. Each one has left its mark on our identity today.
The Royal Bank of Scotland was founded in Edinburgh in 1727. It went on to become one of the biggest banks in Scotland.
Several of our brands are even older than the Royal Bank itself, having been established by the London goldsmiths who were Britain’s first bankers. Among them are:
Child & Co, the oldest name still trading in British banking, dating back to the 1640s.
Coutts, perhaps the most famous private bank of all, established in 1692
Drummonds, founded in about 1712.
NatWest is a much newer name, introduced in 1970, but it grew out of 300 years of banking by more than 200 separate businesses, established in towns and cities all over England and Wales. One of them was the first English bank outside London, formed in the 1650s and now Nottingham Smiths Bank branch of NatWest.
Our specialist brands have particular stories of their own, including:
Lombard, which traces its origins to a railway wagon leasing company established in Rotherham in 1861
Holt’s started as an army pay agency in about 1809. It later developed into a bank by introducing banking services for army officers
Another of our best-known brands is Ulster Bank. It was established in Belfast in 1836, as a bank run by and for the benefit of Ulster people. Before long it expanded throughout Ireland.
Isle of Man Bank was the first company to be formed under the Isle of Man’s Companies Act of 1865. It has remained an important part of life on the island ever since.
More information about all these brands, and the many past names that contribute to their heritage, is available on the RBS Heritage Hub .