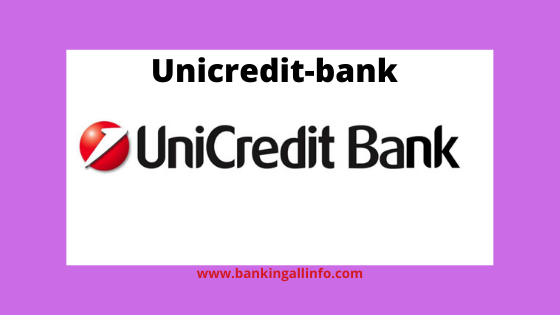 
UniCredit Bank: UniCredit work as the company has its registered office in Rome and general management in Milan.UniCredit’s core markets are Italy, Austria, Russia and Southern Germany. It also has operations in Central and Eastern Europe. The UniCredit Group has investment banking divisions in London, Milan, Munich, Vienna, Moscow, Budapest and Warsaw. UniCredit SpA is an Italian global banking and financial services company with approximately 40 million customers and operations in 22 countries.

UniCredit is a leading European commercial bank with an international network spanning 50 markets, with more than 9,000 branches and over 148,000 employees. The Group operates in 17 European countries. UniCredit benefits from a strong European identity, extensive international presence and broad customer base.
Its strategic position in Western and Eastern Europe gives the group one of the region’s highest market shares.

Ban discrimination on the grounds of sex, age, race, political opinion or trade-union activity.
Practise respect and care towards people at all times. Ban favouritism in recruitment, promotion, and incentive policies.

Share your knowledge without monopolising it to your own advantage.

Clearly define roles and responsibilities for everybody employed in the company.

Listen and offer constant attention to people, respecting their values, feelings, moral stance; never use any form of undue pressure or offence.

It means to co-operate, sharing information and knowledge to generate value and find legitimation of our professional identity beyond organizational boundaries.

We should care about an active listening of our colleagues’ needs, trying to have a positive influence in our working environment.

Create the proper environment freedom of dissent and the freedom to say what one thinks.
Offer everybody the chance to practice the values of entrepreneurship and develop her or his own professional personality.

Keep your word, admitting the possibility of mistakes made in good faith.