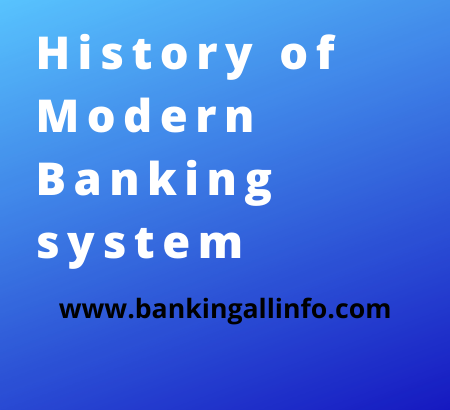 The commercial revolution of the sixteenth and seventeenth centuries, caused by the discovery of America and other sea routes, was a prelude to the later industrial Revolution in England. Industrial Revolution gave a fillip to the production of wealth and to the expansion of internal external trade. This has ushered in a new era in the system of banking which reflects the growing dependence of people in every country on other country for supplies of essential materials and products. Modern banks are geared to modern transportation and communication, which bring the most remote countries into frequent contact with other parts of the world.

Perhaps the most striking features in the structures of Modern Finance is the employment through credit institutions of accumulated wealth. Loans based on deposit funds provide financial support for the varied business and industrial enterprises in which men engage. Financial institutions would be severely limited in the extent of their services if they made use only of the capital invested in their own shares. If they could only hold and repay on demand the wealth placed in their keeping by depositors, accepting a fee for such service, wealth would tend to become static and self-consuming. Through credit, the accumulations of wealth represented by bank deposits, have become a dynamic force in the modern world. Banking systems not only make the actual value of their deposit service available for us, but they have multiplied the effective use of such funds by system of discount and reserve which is of a comparatively recent origin. Commercial banks perform all these functions and are considered to be the chief product of this age.

It is of significance to note that the credit of planting the seed of modern banking in England belongs to the goldsmiths. They were the first bankers in London. In the days of civil war in England, when the Cavaliers and the Round Heads were fighting, people were compelled to deposit for safety their valuables with the goldsmiths who had strong boxes and other arrangements for this purpose. This developed into a custom and merchants also started depositing their cash with these goldsmiths who used to charge a commission for safe-keeping. But with the passage of time the goldsmiths began to use this money and keep current accounts. Thus it is stated that banking in England began to grow somewhere between 1642 to 1645.

The goldsmiths issued receipts promising to pay the value deposited on demand. Later on these receipts became mere promises to pay and when the goldsmith ultimately began to do banking business, they became full-time professional bankers. They began to keep pass-books which were handed to the depositors who could draw drafts on the banker after being guided by the pass-books. This formed the first step towards the ultimate use of cheques.

(i) Convenient: e-banking is much more convenient. One can use e-banking for tracking his/her money in bank without going to bank. It also helps collect information and pay bills online.

(ii) Less Risky: No need to carry money as plastic one can pay by the credit or debit card. This is a lot less risky than cash. As cards can easily be recovered and or closed.

Hence through this internet banking a number of different facilities one can have. People can pay bills online, transfer funds to the desired accounts, shop online and even invest. It saves time and effort. Within the comfort of house one can get their works done.[8]

Banking industry has also received numerous benefits due to growth of E-Banking infrastructure. There are highlighted below[9]:

• Many repetitive and tedious tasks have now been fully automated resulting in greater efficiency, better time usage and enhanced control.

• The rise of E-banking has made banks more competitive. It has also led to expansion of the banking industry, opening of new avenues for banking operations.

• Electronic banking has also helped bank in proper documentation of their records and transactions.

• The reach and delivery capabilities of computer networks, such as the Internet, are far better than any branch network.

Electronic Banking as already stated has greatly serviced both the general public and the banking industry. This has resulted in creation of a better enabling environment that supports growth, productivity and prosperity[10]. Besides many tangible benefit in form of reduction if cost, reduced delivery time, increased efficiency, reduced wastage, e-banking electronically controlled and thoroughly monitored environment discourage many illegal and illegitimate practices associated with banking industry like money laundering, frauds and embezzlements. Further E-banking has helped banks in better monitoring of their customer base. E-banking also helps in documentation of the economic activity of the masses.

Hacking, spy ware program, computer virus and breaking online password are the weakness of e-banking or Modern banking. Online hackers are using computer virus and after spreading it, they compromise others computer. After this, they know all detail of computer and banking password and illegally transfer money into their accounts.

Commercial Bank is the most regulated of all industries. As bank work it must do so within a climate of extensive federal and state rules designed primarily to protect the public interest. As bank is a very sensitive institution. Any bad sign can cause damage not just to the bank itself but the whole economy. A notions saving hence GDP, Investment and many important factors depends on it. So no banks can enter without the government permission. Even for opening or transferring an existing bank the permission is required.