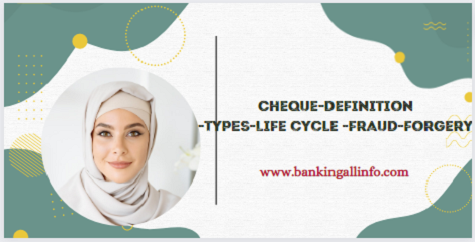 Negotiable Instrument (section-13)
A negotiable instrument means a promissory note , bill of exchange or cheque payable either to order or bearer.

A cheque is a bill of exchange drawn on a specified banker and not expressed to the payable otherwise than on demand.

Drawer- A maker of bill of exchange or a cheque is called the drawer
Drawee- A person thereby directed to pay is called the drawee i.e. a Bank.
Payee- The person named in the instrument , to whom or to whose order the money is by the instrument directed to be paid.
Holder – A holder of a promissory note, bill f exchange or a cheque means any person entitle in his own name to the possession thereof and to receive or to recover the amount due hereon from the drawee.

The drawer of a bill of exchange by drawing it engaged that on due presentation it shall be accepted and paid according to its tenor and that and if it be dishonored he will compensate the holder or any endorse who is compelled to pay it.

A drawer of a cheque be drawing it, engaged that in the case of dishonor by the drawee he will compensate the holder.

Liability of drawee of cheque(sec-31)

The drawee of a cheque having sufficient funds of the drawer in his hands properly applicable to the payment of such cheque must pay the cheque when duly required so to do and in default of such payment must be compensate the drawer for any loss or damage caused by such default.

Where a cheque payable to order purports to be endorsed by or on behalf of the payee, the drawee is discharged by payment in due course.

Where a cheque is originally expressed to be payable to bearer, the drawee is discharged by payment in due course to the bearer thereof.

Notwithstanding any endorsement whether in full or in blank appearing thereon and not withstanding that any such endorsement purport to restricts or exclude further negotiation.

Any material alteration of a negotiable instrument renders the same void as against any one who is partly thereto at the time of making such alteration and does not consent thereto, unless it was made in order to carry out the common intention of the original parties.

Material alteration in relation to promissory notes, bill of exchange or cheque includes any alteration of the date, the sum of payable , the time of payment , the place of payment, and where any such instruction has been accepted generally the addition of a place of payment without the acceptor’s assent.

Bearer Cheque: The name of payee is to be written the proper place of write ‘SELF’. If there is no lawful reason bank is bound to pay on presentation. If it is generally crossed by any one by two parallel lines , for making payment through counter as bearer cheque it must signed by the drawer.

Here bearer means a person who by negotiation comes into the possession of a negotiable instrument, which is payable to bearer.

Order cheque: Payment is to be made to the name of the payee through counter or account.

Open Cheque : When a cheque neither bears the name of the payee nor crossing both general / special, cheques is deemed as open cheque and payment of which may be made to the bearer of the cheque.

When a cheque bears across its face an addition of the word ‘and company’ or any other abbreviation thereof between two parallel transverse lines or two parallel lines simply either with or without the word ‘Not negotiable’ that addition deemed a crossing & the cheque shall be deemed to be crossed generally.

Where a cheque is crossed ‘A/C payee only’, it ceased to be negotiable and it shall be the duty of the banker collecting payment of the cheque to credit the proceeds thereof only to the Account of the payee named in the cheque.

Where a cheque is crossed generally , the banker on whom it is drwawn shall not pay it otherwise that to a banker

Where a cheque is crossed specially, the banker on whom it is drawn shall not pay it otherwise that to a banker to whom it is crossed or his agent for collection.

Validity of a cheque is only 6- months from the date of issue, and payment will be made with in the period other wise deemed a stale cheque and bank is not bound to make payment.

When a cheque is issued on the future date, placed in the counter and bank is not bound to make payment.

Here issue means the first delivery of a promissory note, bill of exchange or cheque complete in form to a person who takes it as a holder.

A cheque is dishonoured due to any descripency including insufficient fund, the beneficiary has every scope to take legal action against the drawer of the cheque as per N.I Act , section -138

Stop payment instruction must be receive from the A/C holder / drawer in writing and it is to be recorded inn respective register and as well as in the account.

After opening the account cheque books issued as the ‘Application for cheque Book’ i.e F-5 and later on issued on the basis of cheque requisition slip enclosed in respective cheque books. For both the cases reciepent signature is to be obtained both in the Application/ slip and in the respective register.
There is no scope to issue duplicate cheque books through F-5 without prior approval from the competent authority o9f the Branch

Cheque fraud and its detection

Life cycle of a cheque

When cheque fraud is perpetrated, a loss is likely to occur. The ideal is to prevent cheque fraud (and monetary losses) at the earliest point in the life cycle of the cheque. If prevention is not possible, detection at a later point in the cheque life cycle is necessary in order to reverse or prevent monetary losses. A number of parties, each with differing responsibilities, come together to initiate and complete the life cycle of a cheque. Although a cheque is essentially a three-party instrument (drawer/ drawee / payee) there are others involved if a full life cycle is considered.

A material alteration to a cheque is any change of the writing on the cheque without the approval of the payer (account holder). A material alteration may be a changed amount, payee, date, etc. One popular form of alteration is “Cheque Washing.” One or more of the cheque categories are chemically removed from the cheque face and unauthorized payment or amount information is added to the cheque. To prevent potential cheque washing alterations, all cheques should be authored with an indelible marker or printed on an ink imbedding printer.

Cheque forgery refers to fraudulent signatures or endorsements. A forged maker’s signature usually appears on a stolen cheque, which is filled out and signed by a criminal in such a way that the signature appears to have been executed by the legitimate account owner. A forged endorsement represents an attempt by a criminal to represent himself as the legitimate payee, or holder in due course, of a real cheque that was found or stolen.

Counterfeits used to be the work of very sophisticated artists. With technological advances, counterfeits can now easily be done with copiers, scanners, printers, and other graphic arts material readily available to the public.

This is a broad category of worthless cheques. Frequently bad cheques are real cheques, drawn on real accounts, and written by the account owner. In many cases the drawee financial institution has closed the accounts represented by these cheques. In any case there is no money, or not enough money in the account to satisfy the payment of the cheque. A large majority of “bad cheques” are used to inflate the balances in fraudulent accounts or to make purchases from unsuspecting merchants.

Cheque kiting is the act or practice of drawing cheques or withdrawing funds against an account balance consisting of uncollected funds.

This practice continues over a period of time, with each written cheque being negotiated against uncollected funds. Cheque kiting can take place between two financial institutions or numerous institutions. The dollar amounts can be a few hundred dollars to millions of dollars. Typically, the first financial institution to discover the kiting activity and place the appropriate deposit holds will be spared the loss.

1. Disturbance of the item’s paper fibers.
2. Different color of paper or ink within a field such as the courtesy dollar amount field.
3. Different styles of writing or printing within a data field.
4. Obvious erasures of any data field.
5. Discoloration of cheque paper around signature line.
6. “Screen box” (50% gray screen on original payee) alteration to hide original payee by overlaying another gray screen box and writing a new payee.
7. Strong chemical smell.
8. Additional payee not typed evenly.
9. Uneven line.

If persons handling cheques spot these and other indicators of potential alterations they should request further identification or verification of the validity of the item.

The following are techniques used to detect possible forged signatures:

CARBON RESIDUE Residue around signature from carbon trace.
SIGNATURE BEYOND
SIGNATURE LINE The typical cheque writer has tailored their signature to stretch from end-to-end of the signature line.
MISSPELLING Misspelling of the account holder name.
IMPROPER BUSINESS HOLDER Forger may not know the true names of the account signers.
NAME(S) FELT-TIP MARKERS Felt-tip markers used to mask previously written information or signature.
INK BLOTS Ink dots within signature left from pauses of the writing instrument during the forgery process.
EXACT DUPLICATION Questioned signature is an exact copy of the signature on file.
UPSIDE-DOWN COMPARISON Turning signatures upside down for comparison may reveal discrepancies not obvious when viewed right side up.
MEMO LINE USAGE Unusual use of memo line which doesn’t follow normal account behavior.

On items being presented for payment at the teller window, the identification information should be recorded on the back of the item. This process will allow for a longer comparison of the endorsement on the cheque and the signature on the identification. Second endorsed items should have an endorsement guarantee from the drawee institution or request the original cheque payee resign the item in the presence of bank personnel

3 COUNTERFEIT DETECTION
. The following warning signs should be considered when trying to detect a counterfeit:
PAPER If the cheque is not printed on good quality paper, cheque further.

If security features are noted in the cheque stock, ensure they are present.

Is the cheque flat and smooth? (Typical cheque holders will either place the cheque in a wallet; place in a pocket or into a purse. Counterfeit cheque passers are supplied with a cheque at each bank location.)

LOCATION Does the Routing Number match the address of the bank?
Location consistency can also be verified by testing the city or state prefix code that is included before the dash in fractional routing number notation that is printed in the upper right hand corner of most cheques.

In order to obtain the first eight digits of the MICR routing number from the fraction numbers:

DATE If the date is not current, question why.

FONT Different font variations can indicate that a fraud has taken place.

ENDORSE
-MENT Endorsements on the back of the cheques should be displayed; their absence could indicate a possible fraud.

4 CHARACTERISTICS AND DETECTION OF CHEQUE KITING

What Precautions to honor Cheque

The Salient Features of a Cheque