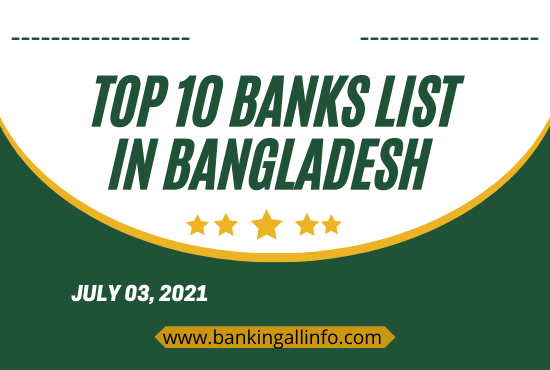 Islami Bank Bangladesh Ltd known as IBBL, it is one of the First Islamic commercial bank in Bangladesh. IBBL is the best bank in the country, it’s awarded in 1999 and 2000 for excellent banking solutions and service.

Having 33,686 shareholders as on thirty-first December 2016, it is in the list with Dhaka securities market and urban centre securities market licensed Capital of the Bank is BDT 20,000.00 Million and paid Capital is BDT 16,099.90 Million. Apart from these, the bank is famous among common people in Bangladesh.

Dutch-Bangla Bank Limited is known as DBBL and the best bank all over in Bangladesh. It is supporting clients with the largest digital banking system and ATM booths.

DBBL maintains its own network and automation. DBBL has over 4,930 ATM’s installed all over Bangladesh, making it the largest network in Bangladesh. On 10 October 2010, DBBL inaugurated its 1000th ATM at the factory premises of the GlaxoSmithKline, Chittagong

BRAC Bank is a private commercial bank in Bangladesh, operated by the BRAC development organisation, focused on Small and Medium Enterprises (SME). The bank has its head office in Dhaka, Bangladesh. It has 187 branches, 18 Premium Banking lounges, 456 SME Unit Offices, 481 agent banking outlets, 375 ATMs, and 96 CDMs.

Sonali Bank is the largest and leading Nationalized Commercial Bank in Bangladesh, After independence of the country Sonali Bank emerged as the largest and leading Nationalized Commercial Bank by proclamation of the Banks’ Nationalization Order 1972 (Presidential Order-26) liquidating the then National Bank of Pakistan, Premier Bank and Bank of Bhwalpur. As a fully state owned institution, the bank had been discharging its nation-building responsibilities by undertaking government entrusted different socio-economic schemes as well as money market activities of its own volition, covering all spheres of the economy.

The bank has been converted to a Public Limited Company with 100% ownership of the government and started functioning as Sonali Bank Limited from November 15, 2007 taking over all assets, liabilities and business of Sonali Bank. After corporatization, the management of the bank has been given required autonomy to make the bank competitive & to run its business effectively.

Sonali Bank Limited is governed by a Board of Directors consisting of 11 (Eleven) members. The Bank is headed by the CEO & Managing Director, who is a well-known Banker and a reputed professional. The corporate head quarter of the bank is located at Motijheel, Dhaka, Bangladesh, the main commercial center of the capital.

Janata Bank is the second largest and leading Nationalized Commercial Bank in Bangladesh, Janata Bank Limited, the 2nd largest State Owned Commercial Bank (SCB) in Bangladesh, is playing pivotal role in overall financial activities of the country. The Bank emerged as ‘Janata Bank’ by combining the erstwhile United Bank Limited and Union Bank Limited under the Banks Nationalization Order (President’s Order- 26) of 1972 and was restructured as a limited company in November, 2007. Since inception in 1972 the Bank has commendably contributed to the socio-economic development of Bangladesh and helped structuring solid financial ground of the country as well. Janata Bank runs its business with 912 branches across the country including 4 overseas branches in United Arab Emirates.

Prime Bank, is a top-tier second generation local commercial bank in Bangladesh established in 1995. Headquartered in the heart of Dhaka’s bustling financial hub Motijheel, the Bank’s operational footprint is spread all over the country with 146 branches and 170 ATM locations. It was incorporated under the Companies Act of 1994.

Bank Asia Limited started its service with a vision to serve people with modern and innovative banking products and services at affordable charge. Being parallel to the cutting edge technology, the Bank is offering online banking with added delivery channels like ATM, Tele-banking, SMS and Online Banking. And as a part of the bank’s commitment to provide all modern and value added banking services, keeping the very best standard in a globalized world. 128 Branches, 3186 Agent Outlets.

12 young businessmen way back in 1983 set the wheel in motion of the city bank. They are the founding fathers of this institution. It was the visionary entrepreneurship of 12 young businessmen who braved the immense uncertainties with courage and zeal in order to set up the country’s first private commercial bank in 1983. They are always in our memory and we wholeheartedly pay tribute to the grand step they took toward making history. They are (from left to right) Mr. Monowar Ali, Mr. Ibrahim Mia (Late), Mr. Abdul Hadi (Late), Mr. M.A. Hashem (Late), Mr. Anwar Hossain, Mr. Abdul Barik Choudhury (Late), Mr. Deen Mohammad, Mr. A.B.M. Feroz, Mr. Md. Ali Hossain, Mr. Azizul Haque Chowdhury, Mr. N.A. Chowdhury (Late).City Bank makes the sentence is “making sense of money”. They provided all kind of financial services and i-Banking also included.

Agrani Bank emerged as a Nationalized Commercial Bank following the Bangladesh Banks (Nationalization) Order 1972 vide President’s Order No. 26 of 1972 under which former Habib Bank Limited and Commerce Bank Limited and renamed as Agrani Bank. The Bank was incorporated as a State-owned Commercial Bank on 17 May 2007 under the Companies Act 1994. On a going concern basis, Agrani Bank Limited took over the business, assets, liabilities, rights and obligations of Agrani Bank through a vendor’s agreement signed on 15 November 2007 between the Ministry of Finance of the People’s Republic of Bangladesh and the Board of Directors of ABL with retrospective effect from 01 July, 2007.

The list of all SWIFT codes of DHAKA BANK LIMITED