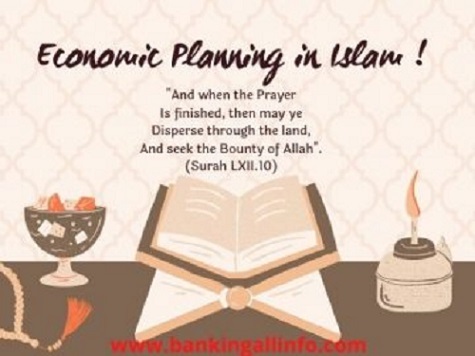 Meaning of Economic Planning in Islam: Economic planning in Islam seems to provide a realizable synthesis of planning by inducement and planning by direction. Various Injunctions of Holy and Sunnah have confirmed this, although no evidence has been found to indicate any systematic treatment of the subject, however, we all know stands for a happy of the spiritual and material values of life. Therefore, worldly occupations are recommended again and again both in the Quran and Hadith. 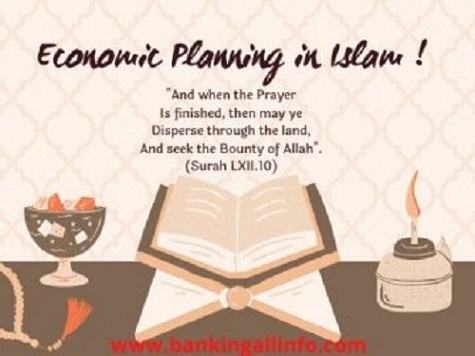 “And when the Prayer
“Is finished, then may ye
Disperse through the land,
And seek the Bounty of Allah”.
(Surah LXII.10)

Modern planning is nothing but the utilization of this “bounty of Allah” in a systematic manner to achieve certain objectives keeping in view the changing needs of the community and values of life. In a wider sense planning refers to the preparation of schemes for any and every economic activity. As Professor Robbins has observed, all life involves planning. The consumer spending his income and the producer deciding what to produce are both planning. But we cannot accept this view of planning mainly because of the fact that there is usually more than one individual involved. The different plans may come into conflict with each other resulting in disorder economic this chaos, and this chaos may lead to wastage of resources. But the Quran has condemned all wastage of resources, human material. Therefore. the modern concept of planning which be understood in a restricted sense, is recognized in Islam, because such planning implies the best possible exploitation of the resources which God has provided for man’s subsistence comfort,

Needless to mention that all resources of wealth- the son, the moon, the stars, the earth, the clouds that bring rain, the winds that drive the clouds and carry the pollen, all phenomena of Nature —are the gift of Allah to the whole of mankind. There are two ways of using “this gift of Allah”. One way is planning by direction and the other planning by encouragement. In communist countries we find planning by direction. In this approach, the problem of finding resources is approached from the standpoint of estimating the resourcing needed for achieving predetermined targets of national income, employment and production. Here all the resources of the community are regarded as available for being pressed into development work. This necessarily means the imposition of extensive controls in order to direct all resources into the desired channel  for achieving the targets. This approach to planning is based on the materialistic interpretation of history and the economic theory of exploitation. This type of planning is foreign to Islam because of Islam’s faith in private ownership, individual freedom and democracy.

Moreover. Islam docs not believe in Marx’s materialistic interpretation of history, The Quran recognizes the diversity of capacities and talents which in itself is beneficent, and, consequently, the diversity of earnings and material rewards (Surah V.32). It does not approve of dead-level equality in the distribution of wealth, as that would defeat the very purpose of the diversity and would amount to denying the favour of Allah (Surah XVI.71). Therefore, in the Islamic state the problem of finding resources should be approached from the standpoint of estimating the maximum amount of resources which the community will be willing be willing to devote to development either through public or private saving. This does not necessarily mean that Islam believes in planning by inducement only. If need be, the Islamic State may direct all resources—material and  human—toward the benefit of the community as a whole, as is  apparent from the early history of financial administration in Islam when,

Beginning with persuasion and recommendation, duties were enforced with all the power that society could command. This was true of Zakat .The history of Islam records many incidents where the State enforced payment of Zakat and the Caliph Abu Bakr waged war against those who defaulted in the payment of it. Again, private ownership is recognized in Islam. But the Shariah of lslam lays down that the owner of the property must discharge his social responsibilities in a manner consistent with the injunctions of the Holy Quran and the Sunnah, otherwise the state can intervene and deprive him of the ownership.

All these instances ample testimony to the fact that planning in Islam relied largely on individual initiative while the State took upon itself the dual role of a brake and an accelerator. Thus. Islam seems to provide the best realizable synthesis of the two opposites; incentive to work is retained by recognizing the restricted private ownership of property and perfect socialist effects are produced by enforcing compulsory distribution of excess of income and property. The structure of the Islamic economy is capitalist in outline though largely restricted by socialist Institutions.

In fact, co-operation between public and private Sectors in the economic planning in Islam. In the case or failure of cooperation the state can intervene in order to achieve the social objectives of planning.

Objectives of Economic Planning in Islam:

We have already mentioned that modern economic planning is done to achieve certain objectives. The theoretical reason for a statement of objectives is that it defines ends from which a choice of criteria can be derived, In this way value judgments can be made by responsible leaders at the of the planning operations and the remainder of the planning work can be turned into a merely technical process of deciding applying criteria that select the of which will best serve the selected objectives.

Thus what is a beneficial objective to the community depends both on the conditions of that community at a particular time and on the values of life. Therefore, the objectives of modern planning vary from state to state. Islam maintains a balance between exaggerated “opposites”. No doubt, objectives of economic planning in Islam are relative to the needs of the community and this changes with the changing circumstances subject to the injunctions of the Holy Quran and the Sunnah. The soundness of

The objectives of Islamic planning will be judged by the principle of beneficence and care for the poor. Planning in Islam must move towards a viable synthesis between the claims of economic growth and social justice through the pursuit of pragmatic policies, consist with the spirit of Islam. Many subsidiary objectives may be formulated from these basic objectives. Of course, there might be a conflict between various objectives under the Islamic framework of planning. But in all cases, a balance will have to be sought between various interests, and predominant intention will be promote benefits and prevent haram. The noted jurist [bn alQayyam says:

“If one contemplates the law which the Almighty ordained for His creatures one finds that they are all designed to ensure a balance of benefits and that where there is a conflict preference is given to the more important as against the less important. The laws also seek to prevent the infliction of harm, but where harm is inevitable, the lesser of evils is preferred. These are the principles implicit in the laws of Allah, which eloquently speak of His wisdom and compassion.”

Therefore, the planners in an Islamic state must keep in view this basic principle in formulating the various objectives of planning.

What are the social and economic values of Insurance