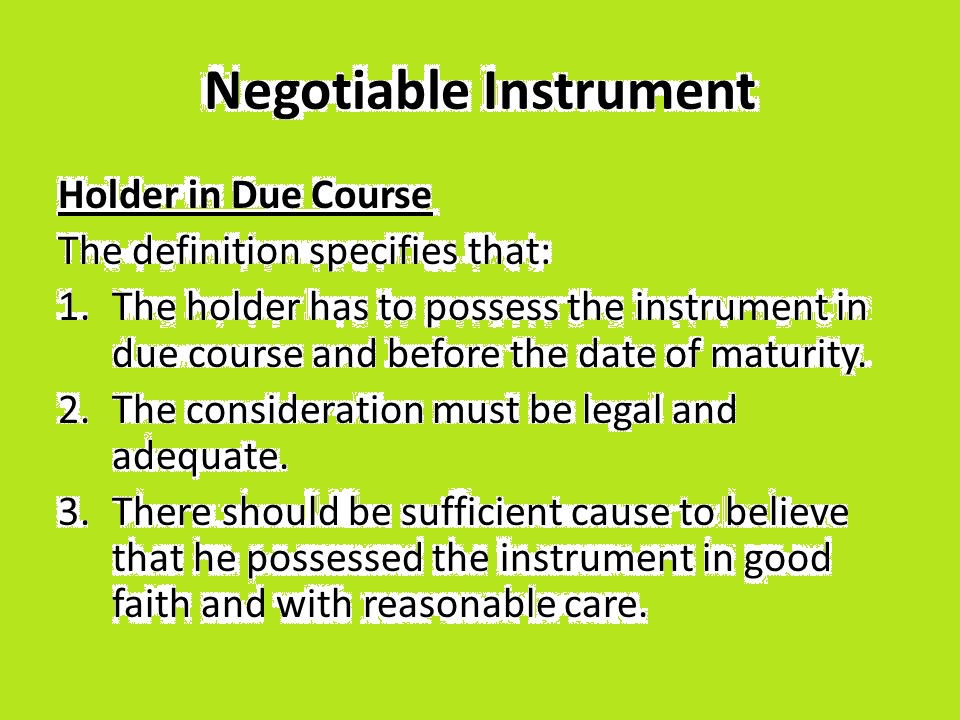 According to section 8 the “holder of a promissory note, bill of exchange or cheque means any person entitled in his own name to the possession thereto and to receive or recover the amount due thereon from the parties thereto”.

A person is called the holder of a negotiable instrument if the following conditions are satisfied:

In case a bill, note or cheque is lost or destroyed, its holder is the person so entitled at the time of such loss or destruction. In other words, the person who was entitled to receive payment at the time the instrument was lost, will continue to be regarded as its holder, the finder does not become its holder.

Holder in due course

According to section 9”holder in due course means any person who, for consideration, become the possessor of a promissory note, bill of exchange or cheque, if payable to bearer, or the payee or endorsee thereof if payable to order, before the amount mentioned in it become payable, and without having sufficient cause to believe that defect existed in the title of the person from whom he derived his title.”

A person becomes a holder in due course of a negotiable instrument if the following conditions are satisfied:

Section 9 lays heavy responsibilities on the person accepting a negotiable instrument in this regard. He should not only have no notice of any defect in the transferor’s title thereto. But he should have no cause to believe that the title was defective. It means that the circumstance of the case should give raise to any doubt or suspicion about the defective title of the transferor. The holder in due course should, therefore, exercise great care and take all necessary precautions in finding out if the transferor’s title was defective. If he shows negligence or does not take due care in this regard, he shall not be called the holder in due course.

Difference between holder and holder in due course:

From the definitions of the terms ‘holder’ and ‘holder in due course’ we may derive the following points of difference between them;

Example: (1) A debt in due from a partner of a firm to X. The partner endorses in favour of X a cheque drawn in favour of the firm.

(2) A cheque for Tk 10,000’s issued by U.S. Embassy in favour of furniture supplier in Dhaka. It bears an endorsement in favour of X, who is government servant. The latter endorses it to Y for valuable consideration. The circumstances of this case are sufficient to cause a doubt in the mind of Y as to how the cheque could have come into the hands of Government servant from firm of furniture suppliers Y is entitled to become holder in due course only if he accepts the cheque after satisfying himself about the good title of his transferor.

Rights of a holder

The holder of a negotiable instrument enjoys the following rights:

Privileges of a Holder in Due Course:

Besides the aforesaid right of a holder, a holder in due course enjoys the following privileges under various section of the Negotiable Instrument Act:

The good title of the holder in due course is affected if he himself was party to the fraud or illegality which affected the instrument earlier.

Example: Sudhir purchased some goods from Ramesh. As the exact amount of money payable by him was not to known to Sudhir, he gave Ramesh a blank cheque duly signed by hi. Ramesh filled in the figure of Tk5000, whereas the amount the amount payable to him was tk 4250 Ramesh endorse the cheque to Kamlesh, who took it for valuable consideration and in good faith. Kamlesh, the holder in due course, is entitled to recover from the bank the amount of Tk5000, though Ramesh from whom he got it, was entitled to recover Tk4250 only.

Example: X draws a bill on Y but signs in the fictitious name of Z. It is payable to the order of Z and is duly accepted by Y. X endorses it to A who become its holder in due course. Y the acceptor of the bill, cannot deny his liability on the bill to the holder in due course on the ground that it was drawn on behalf of a fictitious person Z. It is, however, essential that the signature of Z as drawer and as endorser, must be in the same handwriting.

Example: A draws a bill of exchange on B in respect of an amount which the latter has lost in gambling. B accepts the bill. A endorses the bill to C who becomes its holder in due course. Now C has the right to recover the amount of the bill from B, who cannot plead that he was not liable on the bill as it was drawn for unlawful consideration. The same would be the position of B, if he is made to accept the bill under undue influence, coercion or fraud. In all such cases the right of the holder in due course remains unaffected.

Example:  Ram is the maker of a promissory note for Tk 1000 payable to Ratan, who endorses it to Ravi for valuable consideration. On its due date, it is dishonored. Ravi files a suit for the recovery of the amount. Ram cannot deny that the instrument as drawn by him was not a valid one, i.e., he cannot dispute that no amount was due from him on the promissory note.

Example: X draws a bill of exchange on Y in favour of Z who endorses the same to A, a minor. A endorses it to B and B to C, who becomes its holder in due course. It is dishonored on the due date. C, the holder in due course, has the right to file a suit against all or any of the parties to the bill except A, the minor. Now B the endorser cannot plead that A was a minor and had no capacity to endorse the bill and hence the bill is a void one. He will remain liable on the bill to C.

PAYMENT IN DUE COURSE:

Section 10 states “ payment in due course means payment in accordance with the apparent tenor of the instrument in good faith and without negligence to any person in possession thereof under circumstances which do not afford a reasonable ground for believing that he is not entitled to receive payment of the amount therein mentioned”.

The essential features of a payment in due course are as follows:

The banker should not make payment negligently. He should take all necessary precautions and act as a reasonable person will act in the particular circumstances of a case. For example, he should ascertain that the cheque is complete, all alterations are duly confirmed and the endorsement thereon is regular. In case per pro endorsement, he should ascertain that the signatory is duly authorized to sign on behalf of the payee.  If a cheque with forged signature of a drawer is paid, it will be deemed an act of gross negligence on the part of the banker and its payment will not be deemed payment in due course.

Example of payments which are not deemed payment in due course.

The negotiable instrument Act does not define the term ‘holder for valued In England, according to the Bill of exchange Act, where value of a bill has at any time been given, Its holder is deemed to be a holder for value regards the acceptor and all parties to the bill who become parties prior to such time. The person, who claims himself as the holder for value, need not himself give value. It may be given by prior party.

Example: A bill is drawn payable to A, who transfers it to B for value, B transfers it to C without consideration, C is called holder for value. He can sue A on the bill if it is dishonored.