Reporting of transactions to Bangladesh Bank
Skip to content

Reporting of transactions to Bangladesh Bank

Reporting of transactions to Bangladesh Bank

1. Reporting of transactions under FC Accounts other than those of Bangladeshi National working aboard.
-Deposits and withdrawals in FC should not be included in the summary Statements Viz S-1, S-2 etc.
-Withdrawals in Taka in Bangladesh should be treated as inward remittance and should be shown as purchase in summary statements S-1, S-2, etc. 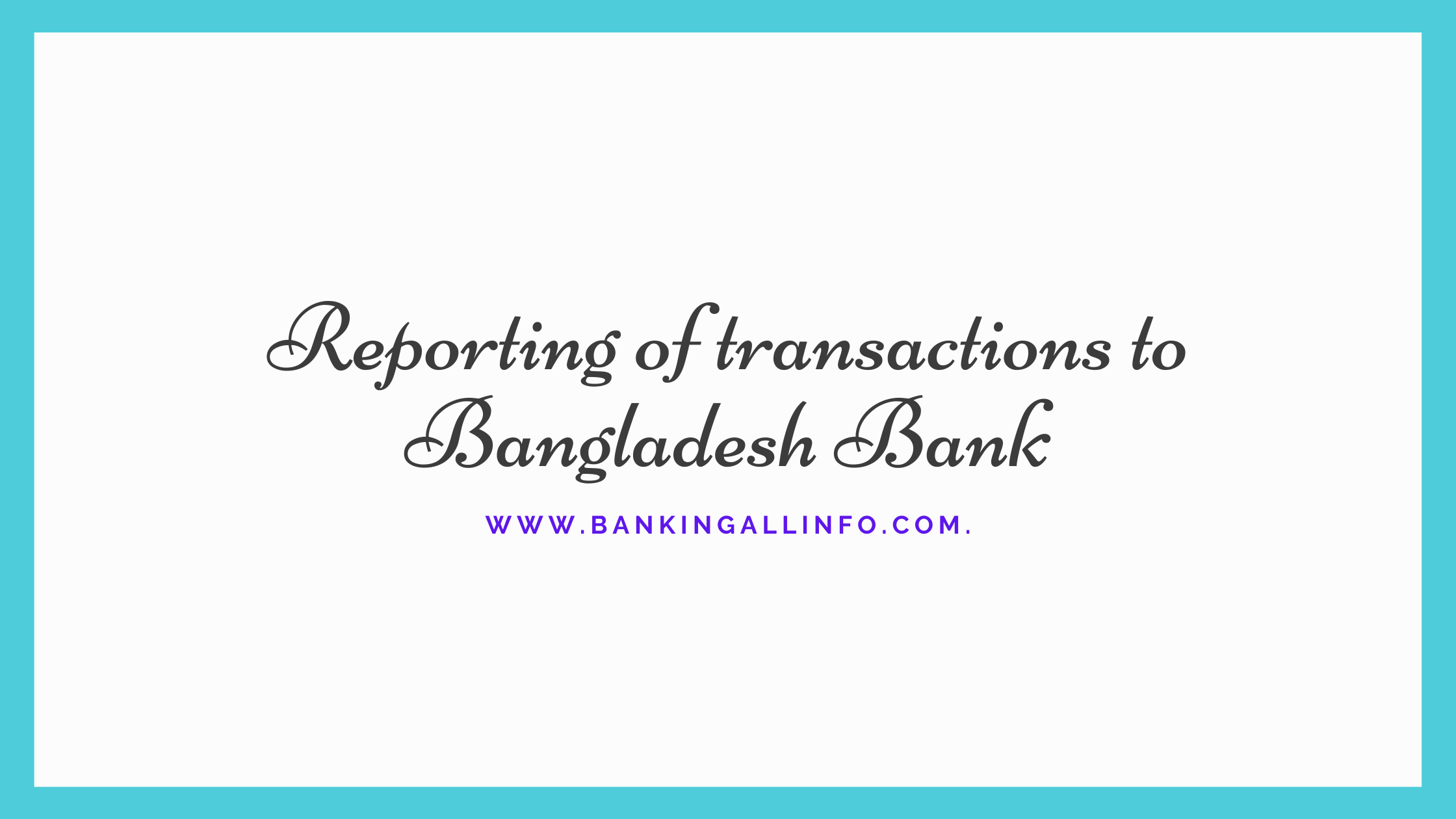 2. Reporting of transactions under FC accounts of Bangladeshi Nationals
-Head Office will submit FCS-7 for Pound Sterling, US Dollar, DM, and Japanese Yen in duplicate.
– The figure reported in FCS-7 must be supported by schedules FCR-123,etc and FCP-1,2,3,etc.along with relevant IMP,TM forms.

– to be reported in summary statements EFCS-8
– Credit to retention quota account out of repatriated export proceeds (except ACU Dollar) shall be shown under SL.No. 9 on the sales side of S-1 as “ Transfer on account of exporters retention quota EFCS-8”. As a contra, this amount will be shown in the deposits side of settlement EFCS-8 at SL. No. Schedule EFCR-8 will accompany this statement.
_Credit in ACU Dollar under mechanism shall be shown on the sales side of S-2 at SL. NO.9 as “Transfer to S-1 on account of exporter retention quota”. Simultaneously, this amount will be shown on the purchase side of S-1 at SL.No.9as “ Receipt from S-2/S-4/S-5 on the account of exporters retention quota” As contra, the same amount will be reported in the sales side of S-1 and EFCS-8.
-The portion of retention quota maintained as term deposits are to be shown separately at item No.1 on the deposit side of EFCS-8 in the space provided for therein.
– Payment of imports and other expenses (except ACU Dollar) by the exporters should be reported in the withdrawal side against SL. No. 1 & 2 enclosing EFCP-1 and EFCP-2 respectively.
– Payment of imports and expenses though ACU Dollar should be shown in the withdrawal side EFCS-8 at SL.No.

3 as “Transfer to S-2 for the settlement under ACU” and its contra on the Purchase side of S-2 of SL. No.9 as “Receipt by way of transfer from EFCS-8 for payment through this account.”

J-1/0-3: For reporting receipt other than exports covering purposes codes from 0001-5999 And a C form must be attached.

J-2/0-3: For reporting receipt other than exports covering purposes codes from 6001-9999 And a C form must be attached.

IRV-1/0-4: Is designed to collect details regarding inward remittances for amount below USD.2,000.00 equivalent taka and covers purposes codes from 0001-5999.

Note:
The total of IRV amount must tally with the corresponding entry against items No.03 of relative summary statement.

SUBMISSION OF RETURNS OF FOREIGN EXCHANGE TRANSACTIONS TO BANGLADESH BANK