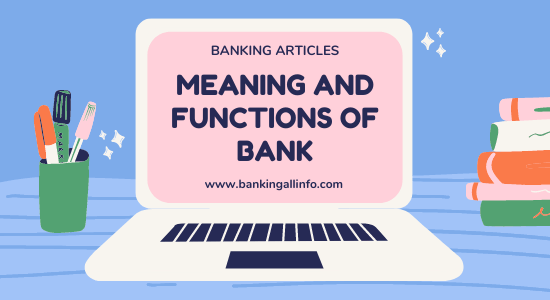 Meaning  and functions of Bank
A bank is an institution which deals with money and credit. It accepts deposits from the public, makes the funds available to those who need them, and helps in the remittance of money from one place to another. In fact, a modem bank performs such a variety of functions that it is difficult to give a precise and general definition of it. It is because of this reason that different economists give different definitions of the bank.
According to Crowther, a bank “collects money from those who have it to spare or who are saving it out of their incomes, and it lends this money to those who require it.” In the words of Kinley, “A bank is an establishment which makes to individuals such advances of money as may be required and safely made, and to which individua ls entrust money when not required by them for use.” According to John Paget, “Nobody can be a bailicer who does not (i) take deposit accounts, (ii) take Current accounts, (iii) issue and pay cheques, and (iv) collects cheques-crossed and uncrossed-for its customers.”
Prof. Sayers defines the terms bank and banking distinctly. He defines a bank as “an institution whose debts (bank deposits) are widely accepted in settlement of other people’s debts to each other.” Again, according to Syaers, “Ordinary banking business consists cash for bank deposits and bank deposits for cash ; transferring bank deposits from one person or corporation to another ; giving bank deposits in exchange for bills of exchange, government bonds, the secured promises of businessmen to repay and so forth”. According to the Indian Companies Act, 1949, banking means “the accepting for the purpose of Indian Companies lending or investment, of dep osits of money from the public, repayable on demand or otherwise, and withdrawable by cheque, draft or otherwise.”
In short, the term bank in the modern times refers to an institution having the following features
(i) It deals with money; it accepts deposits and advances loans.
(ii) It also deals with credit ; it has the ability to create credit. i.e., the ability to expand its liabilities as a multiple of its reserves.
(iii) It is commercial institution ; it aims at earning profit.
(iv) It is a unique financial institution that creates demand deposits which serve as a medium of exchange and, as a result, the banks manage the payment system of the country.

In the modern world, banks perform such a variety of functions that it is not possible to make an all-inclusive list of their functions and services. However, some basic functions performed by the banks are discussed below:

The first important function of a bank is to accept  deposits from  those who can save but cannot profitably utilize  this saving themselves. People consider it more rational to deposit their savings in a bank because by doing so they, on the one hand, earn interest, and on the other, avoid the danger of theft.
To attract savings from all sorts of individuals, the banks maintain different types of accounts:
(i) Fixed Deposit Account. Money in these accounts is deposited for fixed period of time (say one, two, or five years) and cannot be withdrawn before the expiry of that period. The rate of interest on this account is higher than that on other types of deposits. The longer the period, the higher will be the rate of interest. Fixed deposits are also called time deposits or time liabilities.
(ii) Current Deposit Account. These accounts are generally maintained by the traders and businessmen who have to make a number of payments every day. Money from these accounts can be withdrawn in as many times and in as much amount as desired by the depositors. Normally, no interest is paid on these accounts. Rather, the depositors have to pay certain incidental charges to the bank for the services rendered by it. Current deposits are also called demand deposits on demand liabilities.
(iii) Saving Deposit Account. The aim of these accounts is to encourage and mobilise small savings of the public. Certain restrictions are imposed on the depositors regarding the number of withdrawals and the amount to be withdrawn in a given period. Cheque facility is provided to the depositors. Rate of interest paid on these deposits is low as compared to that on fixed deposits.
(iv) Recurring Deposit Account. The purpose of these accounts is to encourage regular sin by the public, particularly by the fixed group. Generally money in these accounts is &- posited in monthly installments for a fixed period and is repaid to the depositors along with interest on maturity. The rate of interest on these deposits is nearly the same as on fixed deposits.
(v) Home Safe Account. Home safe account another scheme aiming at promoting saving habits among the people. Under this scheme a safe i supplied to the depositor to keep it at home and to put his small savings in it. Periodically, the safe  is taken to the bank where the amount of safe is credited to his account.

The second important function of a bank is advancing of loans to the public. After keeping certain cash reserves, the banks lend their deposits to the needy borrowers. Before advancing loans, the banks satisfy themselves about the creditworthiness of the borrowers. Various types of loans granted by the banks are discussed below:
(i) Money at Call. Such loans are very short period loans and can be called back by the bank at a very short notice of say one day to fourteen days. These loans are generally made to other banks or financial institutions.
(ii) Cash Credit. It is a type of loan which is given to the borrower against his current assets, such as shares, stocks, bonds, etc. Such loans are not based on personal security. The bank opens the account in the name of the borrowers and allows him to withdraw borrowed money from time to time upto a certain limit as determined by the value of his current assets. Interest is charged only on the amount actually withdrawn from the account.
(iii) Overdraft Sometimes, the bank provides overdraft facilities to its customers though which they are allowed to withdraw more than their deposits. Interest is charged from the customers on the overdrawn amount.
(iv) Discounting of Bills of Exchange. This is another popular type of lending by the modern banks. Through this method, a holder of a bill of exchange can get it discounted by the bank. In a bill of exchange the debtor accepts the bill drawn upon him by the creditor (i.e, holder of the bill) and agrees to pay the amount mentioned on maturity. After making some marginal deductions (in the form of commission), the bank pays the value of the bill to the holder. When the bill of exchange matures, the bank gets its payment from the party which had accepted the bill. Thus, such a loan is self-liquidating.
(v) Term Loans. The banks have also started advancing medium-term and long-term loans. The maturity period for such loans is more than one year. The amount sanctioned is either paid or credit to the account of the borrower. The interest is charged on the entire amount of the loan and the loan is repaid either on maturity or in installments.

A unique function of the bank is to create credit. In fact, credit creation is the natural outcome of the process of advancing loan as adopted by the banks. When a bank advances a loan to its customer, it does not lend cash but opens an account in the borrower’s name and credits the amount of loan to this account. Thus, whenever a bank grants a loan, it creates an equal amount of bank deposit. Creation of such deposits is called credit creation which results in a net increase in the money stock of the economy. Banks have the ability to create credit many times more than their deposits and this ability of multiple credit creation depends upon the cash-reserve ratio of the banks.

Banks also render a very useful medium of exchange in the form of cheques. Through a cheque, the deposit or directs the bankers to make payment to the payee. Cheque is the most developed credit
instrument in the money market. In the modern business transactions, cheques have become much more convenient method of settling debts than the use of cash.

In addition to agency services, the modern banks provide many general utility services as given below:
(i) Locker Facility. Banks provide locker fac ility to their customers. The customers can keep their valuables and important documents in these lockers for safe custody.
(ii) Traveller’s Cheques. Banks issue traveller’s cheques to help their customers to travel without the fear of theft or loss of money. With this facility, the customers need not take the risk of carrying cash with them during their travels.
(iii)Letter of Credit Letters of credit are issued by the banks to their customers certifying their creditworthiness. Letters of credit are very useful in foreign trade.

(iv) Collection of Statistics. Banks collect stat istics giving important information relating to industry, trade and commerce, money and banki ng. They also publish journals and bulletins cont aining research articles on economic and financial matters.
(v) Underwriting Securities. Banks underwrite the securities issued by the government, public or private bodies. Because of its full faith in banks, the public will not hesitate in buying securities carrying the signatures of a bank.
(vi) Gift Cheques. Some banks issue cheques of various denominations (say of Rs.11, 21, 31, 51.101, etc.) to be used on auspicious occasions.
(vii) Acting as Referee. Banks may be referred for seeking information regarding the financial position, business reputation and respectability of their customers.
(viii) Foreign Exchange Business. Banks also deal in the business of foreign currencies. Again,they may finance foreign trade by discounting foreign bills of exchange.

Source: Money Banking and International Trade By DR. R.R. Paul Page-5-B to 8-B

BANKING ARTICLES
CASH TRANSACTIONS REPORT (CTR) AND SUSPICIOUS TRANSACTION REPORT (STR) Recognition of suspicious Transactions As types of transactions that may be used by money launderer are almost unlimited, it is difficult …

BANKING ARTICLES
How to avoid becoming a phishing victim in banking area What is Phishing? Phishing is a form of social engineering attack used by cyber criminals to steal sensitive information. Customers …

BANKING ARTICLES
The term “Customer” of a bank has not been defined by any law. According to Sir John Paget, “to constitute a çustomer there must some recognisable course Definition of a Customer The …

BANKING ARTICLES
Different Types of Banking Different Types of Banking_Banking: Most of the people, even most of the bankers do not know what types of banking are doing all over the world. Chain …
BANKING ARTICLES
What do you know about working capital Apart from financing for investing in fixed assets, every business also requires funds on a continual basis for carrying on its operations. These …
BANKING ARTICLES
What is M-Commerce What is M-Commerce: M-Commerce also called as Mobile Commerce involves the online transactions through the wireless handheld devices such as mobile phone, laptop, palmtop, tablet, or any …

What is the Retail Banker Functions?