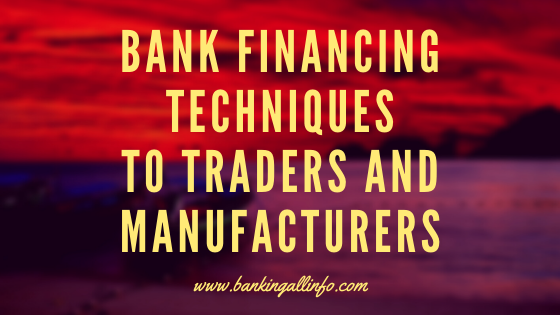 Financing Techniques
Exporters, both traders and manufacturers, need finance before and after shipment of goods to the foreign buyers. In each of these phases (before and after), exporters need different types of financial assistance depending on the modes of payments contained in export contracts or documentary credit. Moreover, these sorts of financial facilities are extended not only by banks but also by the traders (suppliers of raw materials and finished products) themselves, popularly known as trade credits. In the following sections, both trade and bank-related export credits have been presented.

In most businesses, goods and services are invoiced by the seller (raw material supplier) and paid for by the buyer (ultimate exporters) at the end of the month or with a credit of 30, 60, 90 days or more. The period between the date of delivery and the actual receipt of the payment by the seller is the most prevalent form of credit.

Trade credit as it is called, is a facility based on a pre-agreed arrangement between the buyer and the seller. It is the simplest, quickest to arrange and often the cheapest method for the buyer. Being based on mutual interest and trust between parties that have grown to know each other over a period, it does not normally involve pledging assets as security or drafting legal documentation.

Trade credit may, however, require the buyer to give the seller some form of compensation for the facility granted, such as interest or exclusivity. Instead of paying by cheque or bank transfer, a buyer, with the agreement of the seller, may, on receipt of the goods, issue a promissory note. This is a form of IOU, in other words, a promise to pay in the future.

When the seller and the buyer are less well known to each other, or the seller is less sure of the buyer’s creditworthiness, the seller may prefer to issue a bill of exchange to the buyer. A B/E is defined as an unconditional order in writing, addressed by one person to another, signed by the person giving it, requiring the person to whom it is addressed to pay on demand, or at a fixed or determinable future time, a certain sum of money to, or to the order of, a specified person, or to the bearer. In continental Europe, a bill of exchange is guaranteed by the buyer’s bank, as required by the seller. This type of B/E is known as aval.

The trade-credit form of export financing before the shipment of goods is widely prevalent in Bangladesh. However, unlike other countries, the extension of discounting facilities by banks to promissory notes or bill of exchange evidencing trade credits are not available in Bangladesh.

Rather than obtaining trade credit, or in addition to it, you may decide that you need a more permanent outside source of finance to pay for goods and services. You could make this decision, particularly when, in your normal operating activities, the flows of cash inward and outward do not match each other perfectly, leaving gaps during which you are short of money. Provided your overall performance and cash flow are satisfactory, you can apply for short-term credit to financing institutions such as banks, specialized financial institutions and others.

1. Export Cash Credit (Hypothecation)
Under this arrangement, a credit is sanctioned against the hypothecation of the raw materials or finished goods intended for export. Such a facility is allowed only to major exporters. As the bank has got no security in this case, except for charge documents and lien of export L/C or contract, the bank normally insists on the exporter furnishing collateral security. The letter of hypothecation creates a charge against the merchandise in favor of the bank but neither the ownership nor the possession is passed to it.

2. Export Cash Credit (Pledge)
This credit facility is allowed against a pledge of exportable goods or raw materials. In this case, cash credit facilities are extended against the pledge of goods to be stored in the godown under the bank’s control by signing a letter of pledge and other pledge documents. The exporter surrenders the physical possession of the goods to the bank’s effective control as security for payment of bank dues. In the event of failure of the exporter to honor his commitment, the bank can sell the pledged merchandise for recovery of the advance.

In this case, the credit limit is sanctioned against Trust Receipt (TR). Here also, unlike the pledge, the exportable goods remain in the custody of the exporter. He is required to execute a stamped export trust receipt in favor of the bank, wherein a declaration is made that goods purchased with financial assistance of the bank are held by him in trust for the bank. This type of credit is granted when the exporter wants to utilize the credit for processing, packing and rendering the goods in exportable condition and when it seems that exportable goods cannot be taken into the bank’s custody. This facility is allowed only to the major party and collateral security is generally obtained in this case.

In this case, credit facilities are extended against security of Railway Receipt/Steamer Receipt/Barge Receipt/ Truck Receipt evidencing transportation of goods to the port for the shipment of the goods in addition to the usual charge documents and lien of export letter of credit. This type of credit is sanctioned for the transitional period from despatch of the goods till the negotiation of the export documents. The drawings under export cash credit(hypothecation/pledge) limit are generally adjusted by drawings in packing credit limit which is in turn liquidated by negotiation of export documents.

6. Advance against a Red-clause Letter of Credit

Under a Red clause letter of credit, the opening bank authorizes the advising bank/negotiating bank to make an advance to the beneficiary prior to shipment to enable him to procure and store the exportable goods in anticipation of his affecting the shipment and submitting a bill under the L/C. As the clause containing such authority is printed/typed in red ink, the L/C is called Red Clause L/C. Though it is not prohibited, it is very rare in Bangladesh.

Methods of payment and financing techniques