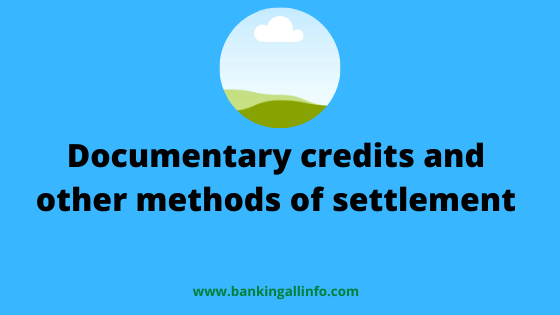 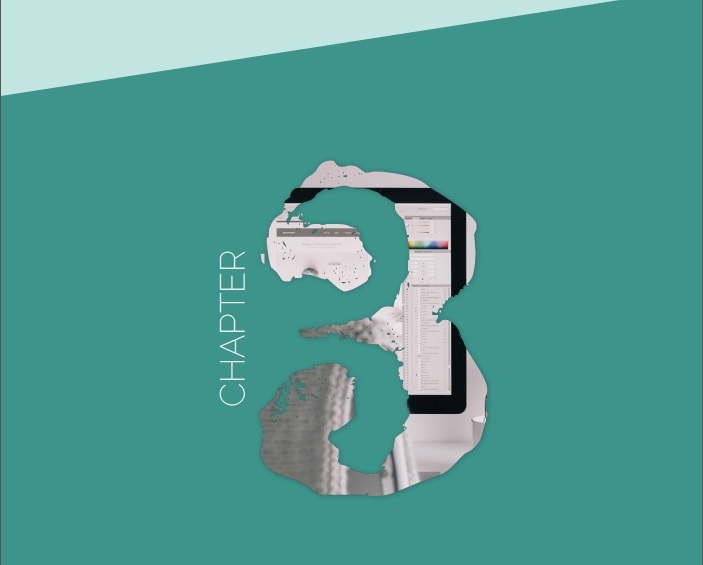 If we review this definition, we can see that any method of settlement (‘however named or described) that describes itself as being irrevocable, and which is payable upon the presentation of one or more stipulated
documents, can be made subject to UCP 600. In this context, it would be possible for not only a standby Ietter of credit to be made subject to the rules (as specifically provided in UCP 600, article 1) but also a bank
guarantee.
Although it is a bank that will usually issue a documentary credit, any company or individual may also act in the capacity of the issuer. It is often a decision for a beneficiary whether an issuer has the financial means to fulfill
the terms of the undertaking given in its documentary credit. A beneficiary would be well advised to seek the advice of its bankers on the suitability of the issuer of a documentary credit, because there may be various risks that require consideration. For example, the availability of foreign exchange, political risks, etc. as well as the creditworthiness of the issuer, are potential concerns that may impact any payment due to that beneficiary.
For the purpose of this study text, we will focus on documentary credits that are issued by banks.

3.2 The structure of a basic documentary credit transaction

A trade transaction will normally begin with the establishment of a purchase or sale contract, or proforma invoice, between a buyer and seller. The contract or proforma invoice will indicate the method of settlement, among other details such as the nature of the goods, the amount, and the names of the buyer and seller. In the example in Figure 3.1, the contract indicates a documentary credit as the chosen method of settlement.
The structure of a basic documentary credit transaction that does not bear the confirmation of the advising bank, and which covers the movement of goods, ¡s highlighted in Figure 3,1 and described in more detail below. It should be noted that there are a number of variations to this structure, and these are explained later in this study text.
Notes to Figure 3.1
1. The contract is agreed between the buyer (‘applicant’) and seller (‘beneficiary’) indicating a documentary credit as the method of settlement.
2. The applicant applies to its bank for the issuance of a documentary credit, usually by completing the bank’s standard application form.
3. Subject to a credit facility being in place and the bank agreeing to the terms and conditions that have h.een stated in the application form, the bank issues the documentary credit and advice It through a bank in the country of the beneficiary, known as the ‘advising bank’. 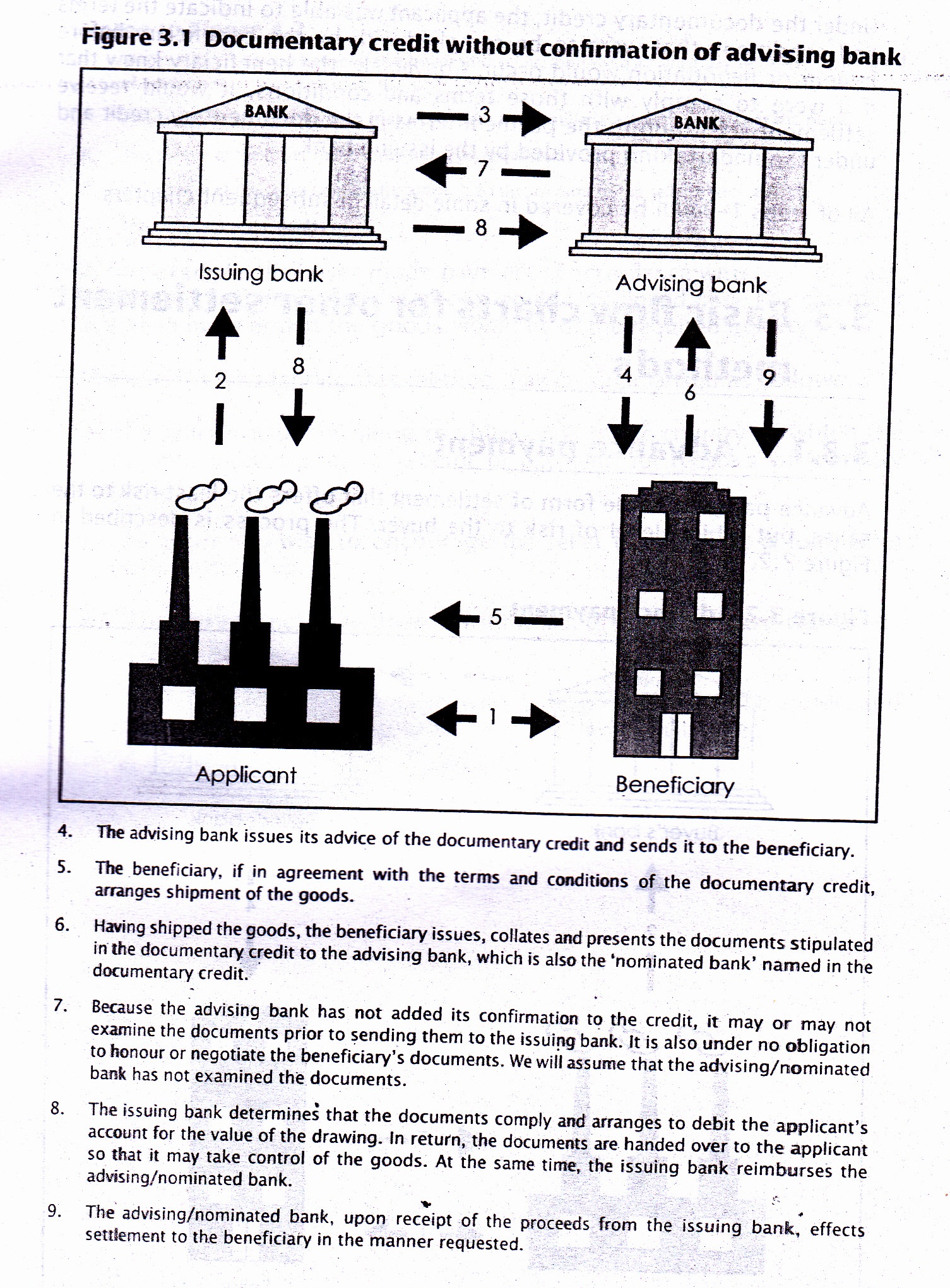 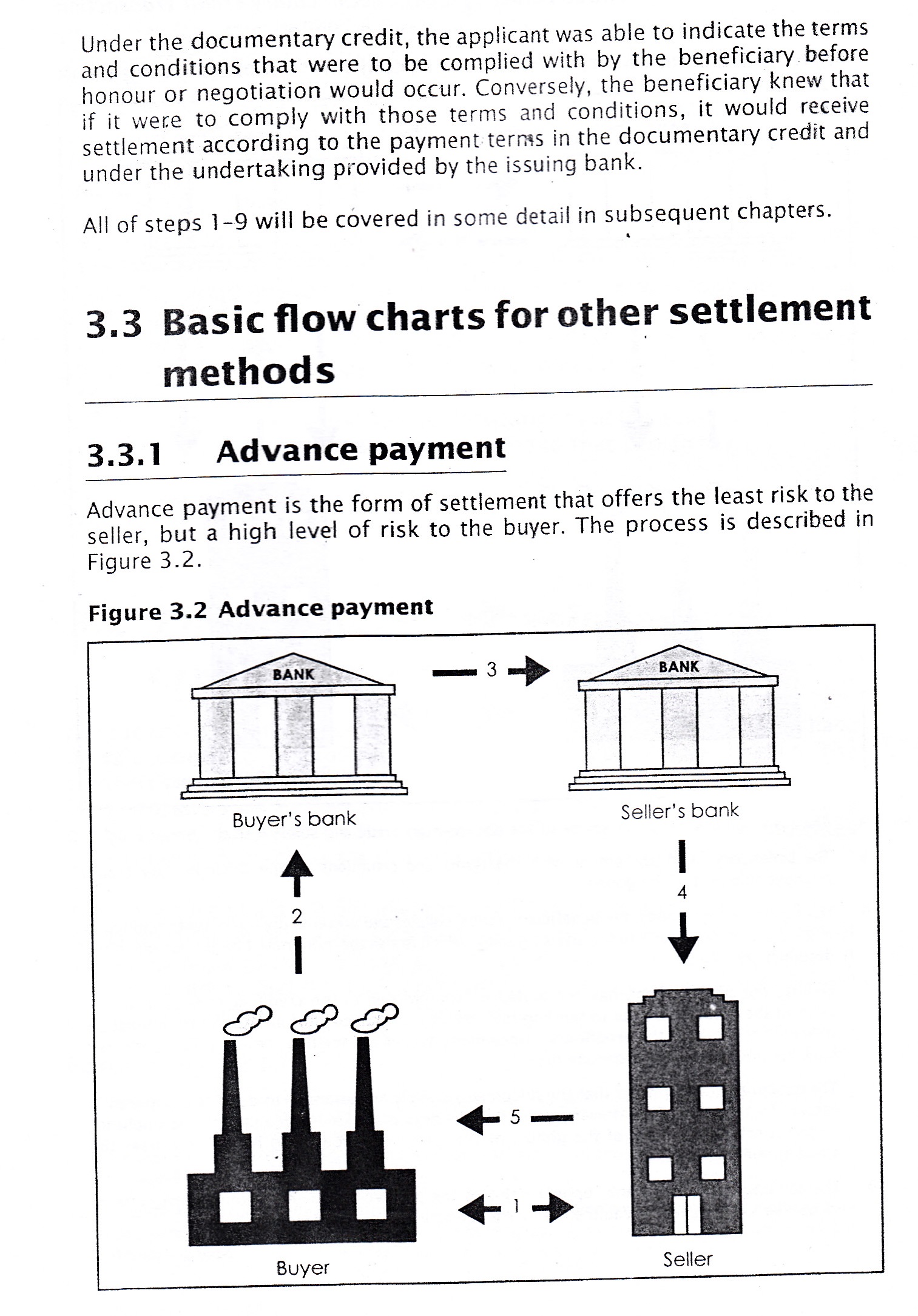 Notes to Figure 3.2
I. The contract is agreed between the buyer and seller, indicating advance payment as the method of settlement.
2. The buyer instructs its bank to make payment to the seller’s account with a sspecificbank.
3. The banker of the buyer makes payment, as requested.
4. The banker of the seller credits the amount to the account f the seller under advice.
S. The seller ships the goods.
In this example, the buyer made payment in accordance with the contract but had no guarantee that the goods would be shipped once the payment had been made or that the goods would be of the required quality.
The reasons for adopting this method may be summarised as follows.
• The seller may be unwilling to ship goods to the country in which the buyer is located prior to receipt of payment, for reasons of ‘country risk’.
• The buyer may wish to encourage the seller to enter into a long-term trade relationship.
• The seller may not have finance with which to buy or prepare the goods for shipment.
• The buyer may feel comfortable with its relationship with the seller, and with both the credit and country risks relating to that seller 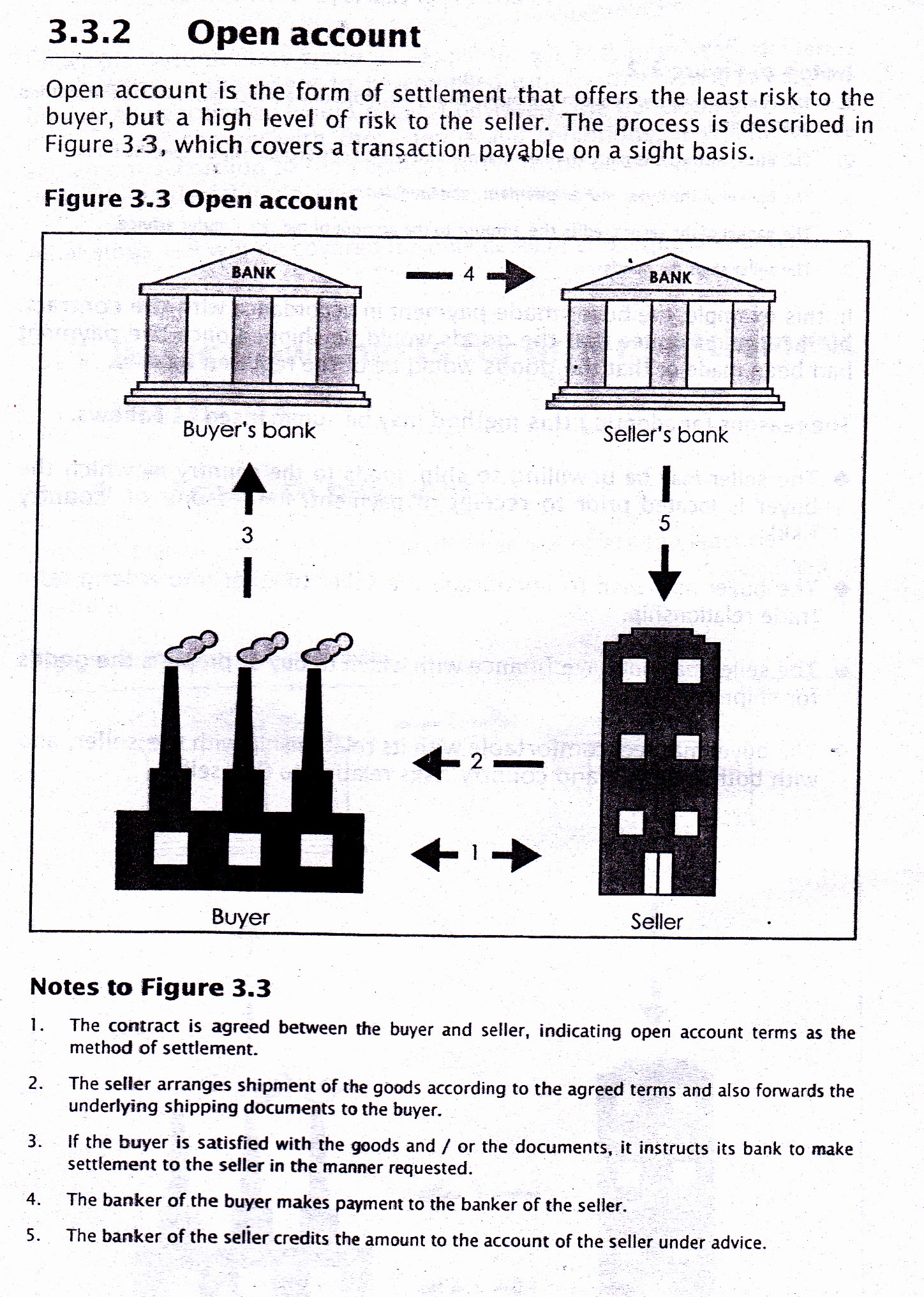 In this example, the seller had no bank undertaking and was entirely reliant upon the buyer to make payment, as agreed in the sales contract.
When business is conducted on open account terms, the seller dispatches goods to the buyer without any guarantee of payment. On dispatch, the seller sends the buyer an invoice (together with other appropriate shipping documents) for payment on an agreed date or at the end of an agreed period. For example, the agreed period might be for payment to be made at the end of the month following the month of shipment. The buyer will
make arrangements to pay on the relevant date, according to the terms of the sales contract. The buyer may use any appropriate payment method, such as an international bank transfer or bank draft, absent any specific
request of the seller.
Open account trading is most commonly used when the two companies concerned have a long-established trading relationship. For example, transactions between sellers and buyers located in countries in Western
Europe and the United States are often conducted on this basis. Sellers may also use open account trading to secure contracts with parties in some developing countries to which documentary credit terms have been applied in the past.
Open account trading offers several advantages – particularly that it is simple to administer and involves minimal banking fees or other costs. The system is particularly attractive to buyers because it affords them the
opportunity to examine the goods before they have to make payment. Sellers using open account methods obtain no security for payment and have to rely entirely on the creditworthiness and good faith of the buyer.
This may be contrasted with the situation under documentary credits and documentary collections, in which the seller obtains the security of a bank undertaking or a bank retaining control over the documents that relate to
the shipment. The only involvement by banks in open account trading is in the transfer of funds on behalf of the buyer to the seller.
3.3.3 Documentary collection payable on a sight basis
Documentary collection payable on a sight basis is a form of settlement that can offer reduced, the risk for both the buyer and seller. The buyer need not pay the collection until it has viewed the documents at the offices of
its bank, which will be known as the collecting bank’. The seller knows that its documents will be held within the banking system until such time as they are honoured. However, the seller, known as the ‘principal, has no
guarantee of payment.
Documentary credits and other methods of settlement? 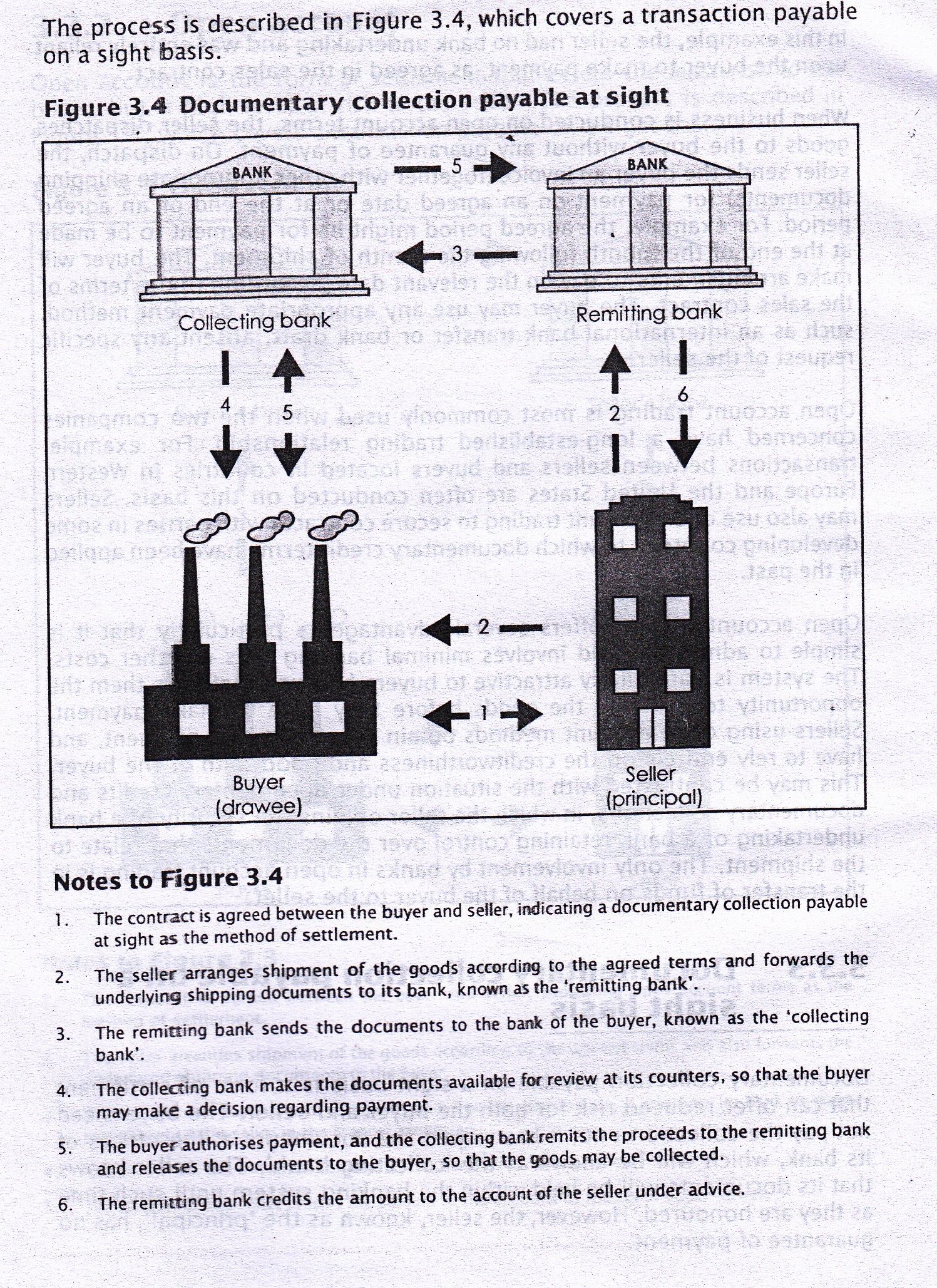 3.3.4 Documentary collection payable on a usance basis
Documentary collection payable on a usance basis is a form of settlement that can offer reduced risk for both the buyer and seller. The buyer need not accept the draft presented with the collection until it has viewed the
documents at the offices of its bank, which will be known as the collecting bank’. The seller knows that its documents will be held within the banking system until such time as the draft is accepted. However, the seller has no undertaking that the draft will be honoured on the due date, even if accepted by the buyer (‘drawee’).
The process is described in Figure 3.5 (overleaf), which covers a transaction payable on a usance basis.
Documentary credits and other methods of settlement? 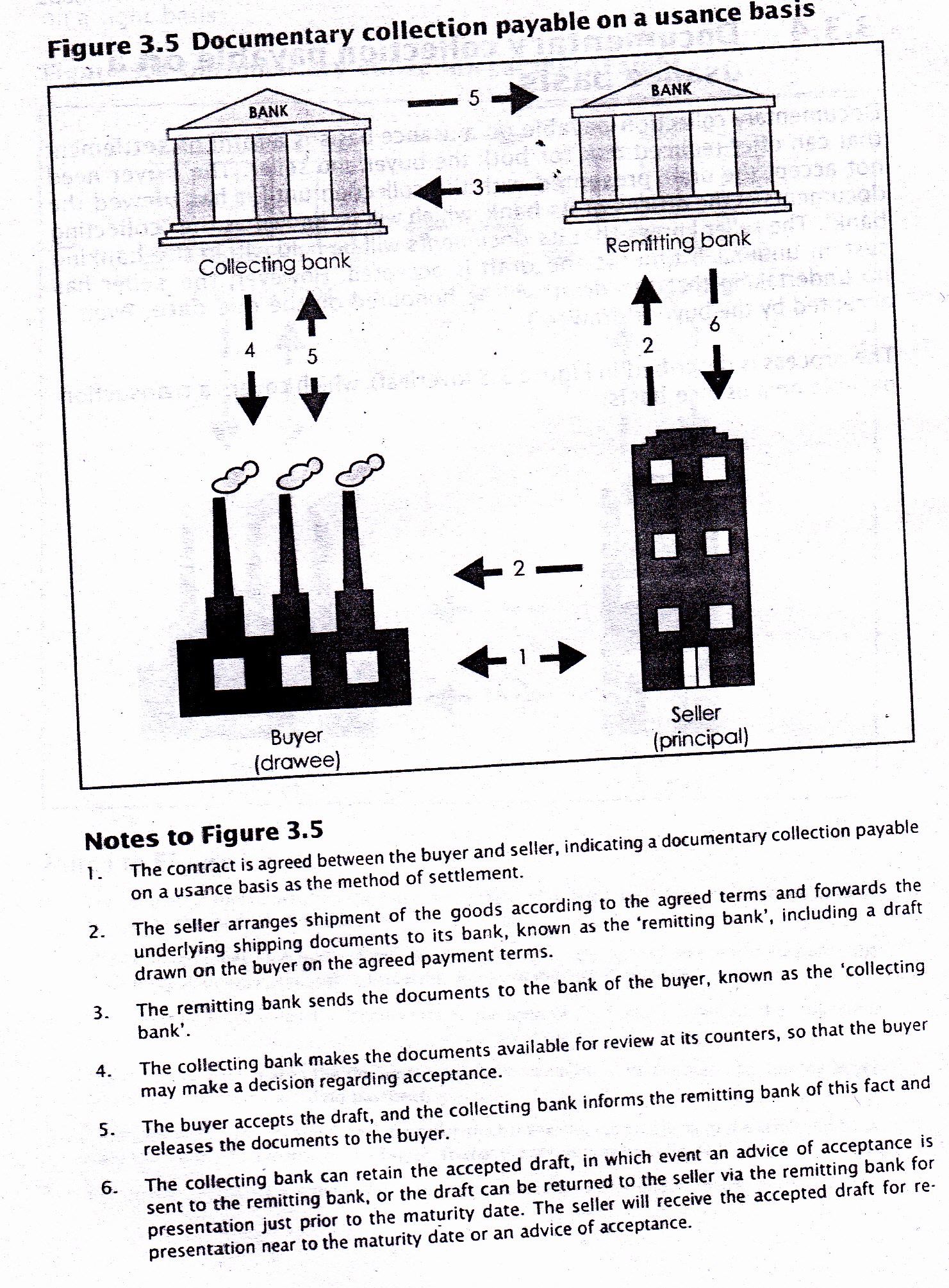 The payment of the accepted draft will happen as a result of the buyer making payment on the due date or a new collection instruction being raised to forward the accepted draft that had previously been returned to
the seller.
In summary, under a documentary collection, the seller ships the goods to the buyer ¡ri the importing country. At the same time, it hands over to its bank the shipping documents relating to the goods and their shipment.
Examples of common documents are bills of lading, commercial invoices,insurance documents and certificates of origin. The bank forwards these to a correspondent bank in the buyer’s country, which is often the buyer’s
bank, to handle the documents in accordance with the instructions of the seller, as instructed by the seller’s bank in its collection instruction.
Under this procedure, banks manage the document-handling process, but they do not usually themselves give any payment undertaking. This solution offers the seller less security than a documentary credit, but as
a consequence the costs are lower. It nonetheless gives the seller some measure of security for payment. The seller’s interest is best served where the buyer is not able to obtain possession of the goods without the
documents that are sent through the banking system. The full security •of a documentary collection applies only if the transport document is a negotiable bill of lading and/or if the goods are consigned to the bank in
the importing country, with the consent of that bank.
If the seller has agreed to supply the goods on short-term credit, it can stipulate that the documents be handed over against the buyer’s acceptance of a bill of exchange or signature on a promissory note The seller may
be able to discount the bill or note in return for an immediate payment. The international rules governing collections are the ICC Uniform Rules for Collections, ICC Publication No. 522.

3.3.5 Payment secured by a bank guarantee or the standby letter of credit

It may be the case that a seller will look to secure a payment that is to be made on open account terms, or by documentary collection, by requesting that the buyer arrange for the issuance of a bank guarantee or standby
• letter of credit under which it may draw in theevent that the underlying transaction is not honoured in the manner that has been agreed.
For the purpose of deinonstrating this transaction, Figure 3.6 uses a bank guarantee as an example, but the process could equally apply to a standby letter of credit. Standby letters of credit are covered in Chapter 21.
Documentary credits and other methods of settlement?

The issuing bank determines that the demand complies and arranges the applicants account for the value of drawing. In return, the demand handed over to the same time, the issuing bank reimburses the advising bank.
9. The advising bank, upon receipt of the proceeds from the issuing bank, effects settlement to the
beneficiary in the manner requested.
Although the seller has obtained a bank undertaking to ensure that payment for its goods, services or performance will be met, the buyer has the risk of an unjustified claim being made under the guarantee or standby letter of credit.
Documentary credits and other methods of settlement?
Source:
Guide to Documentary Credits by Gary Collyer, Chapter- Two, page # 17-29

Difference between Letters of Credit and Documentary Collection