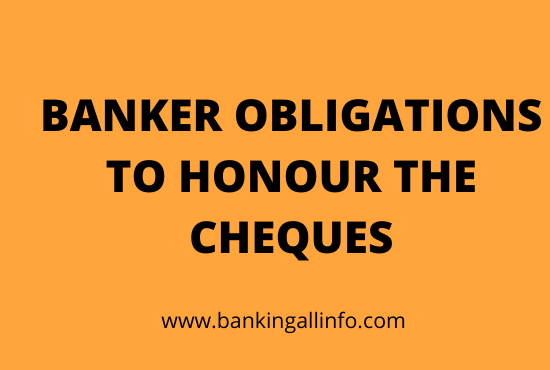 Banker obligations to honour the cheques

Obligations to honour the cheques :
The deposits accepted by a banker are his liabilities repayable on demand or otherwise. The banker is, therefore, under a statutory obligation to honour his customer’s cheques in the usual course. Section 31 of the Negotiable Instruments Act, 1881, lays down that:
“The drawee of a cheque having sufficient funds of the drawer in his hands, properly applicable to the payment must compensate the drawer for any loss or damage caused by such default.”

BANKING IN INDIA
List of all the acts related to Bank in India 1. Negotiable Instrument Act– 1881 2. The Bankers’Books Evidence Act– 1891 3. The Reserve Bank of India Act– 1934 4. …
BANKING IN INDIA
Laws of Banking in India   1. Evaluation of Banking Law in India Banking as a business has its own distinctive features when compared with all other trade and business. …

BANKING IN INDIA
Top 10 Biggest Banks In India for 2018 Top 10 Biggest Banks In India for 2018 1. State Bank Of India Type:  Public Industry: Banking, Financial services Founded: 2nd June …
BANKING IN INDIA
INDIA BANKING REGULATION ACT, 1949 The law governing the working and functions of banks in India was .passed in 1949 and named as the Banking Regulation Act, 1949. Before passing …
BANKING IN INDIA
BANK OF INDIA ACT, 1934  The Reserve Bank of  India Act was passed in 1934 to establish the Reserve Bank of India which is the guardian of the banking system …
BANKING IN INDIA
Indian Bank List Indian Banks Indian Bank is an Indian state-owned financial services organization which established in 1907 and headquartered in Chennai, India. It has 20464 employees, 2416 branches in …

Duties and Obligations of Paying Banker