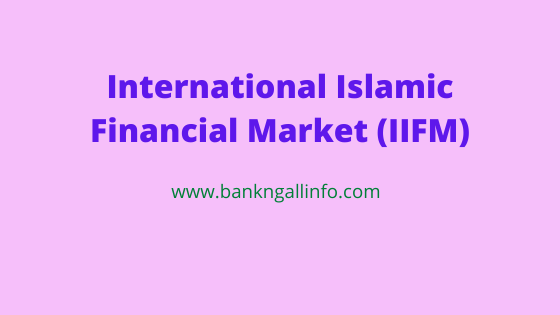 International Islamic Financial Market (IIFM): Established in 2001 in Manama, Bahrain to develop and regulate an International Financial market bašed on Shari’ah Rules and Principles. IIFM which is based in Manama and hosted by the Central Bank of Bahrain (CBB), was established in 2002 under the Royal Decree No (23) Year 2002 of the Kingdom of the Kingdom of Bahrain as a neutral and non-profit infrastructure development institution, by the collective efforts of the Islamic Development Bank, Autoriti Monetari Brunei Darussalam (formerly Ministry of Finance Brunei Darussalam), Bank Indonesia, Bank Negara Malaysia (delegated to Labuan Financial Services Authority), Central Bank of Bahrain (formerly Bahrain Monetary Agency) and the Central Bank of Sudan.

IIFM works under the guidance of its Board of Directors and with the support of its member institutions. Its main strength is the pooling of expertise from the banks, legal, accounting and other market participants who work together under the guidance of the IIFM Shari’ah Board for the benefit of the IFSI.

Established in Dubai UAE in the year 2005 to settle financial and commercial disputes between financial Institutions that have chosen to comply with the Shariah to settle disputes.

Objectives
The main objectives of the Forum are :