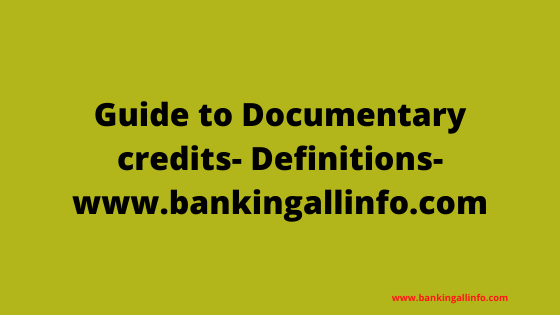 4.1 Roles and responsibilities of parties involved in a documentary credit

UCP 600, article 2, defines a ‘beneficiary’ as follows.
Beneficiary means the party in whose favour a credit is issued.
Following shipment or dispatch of the goods, or when the required service or performance has been provided, the beneficiary will issue, collate and present the stipulated documents to the issùing bank, a confirming bank
(if any), or a nominated bank for honour or negotiation.
The various interactions of the beneficiary are handled in a number of the chapters of this study text. .

UCP 600, article 2, defines an ‘advising bank’ as follows.
Roles and responsibilities of parties involved in a documentary credit

For a cross-border transaction, an issuing bank will usually electronically transmit or send, a documentary credit to a bank in the beneficiary’s country with which it maintains a correspondent banking relationship, requesting that bank to advise it to the beneficiary.
The transmission of a documentary credit to an advising bank is normally completed by the use of a Society for Worldwide Interbank Financial Telecommunication (SWIFT) MT700 message, but it could also be accomplished by telex, fax, email or letter, depending upon the arrangements that are in place between the two banks.
The requirements and role of an advising bank, when advising a credit, are detailed in Chapter 9.

A bank that adds its confirmation to a documentary credit, upon the authorization or request of an issuing bank, provides a beneficiary with an additional irrevocable and independent undertaking that is separate from
that of the issuing bank. .
It is common for a confirming bank to act in the capacity of advising bank and nominated bank, but this is not an absolute requirement of UCP 600.
The requirements of a bank, when adding confirmation to a credit, are detailed in Chapter 10.
4.1.5 Nominated bank
UCP 600, article 2, defines a ‘nominated bank’ as follows.

4.3 Other roles performed by banks

UCP 600, sub-article 13(a), describes a ‘reimbursing bank’ as the bank a documentary credit upon which the nominated bank (the ‘claiming bank’) may claim in respect of any honor or negotiation that it has efected to the beneficiary.
Bank-to-bank reimbursements are covered in more detail in Chapter 22.

UCP 600. sub-article 9(c). describes a ‘second advising bank’ as a bank utilized by the advising bank to advise the credit or any amendment to the beneficiary.
A second advising bank may also be named in the documentary credit. In this event, it is likely that the named bank will be the beneficiary’s banker and that the beneficiary will have previously requested the applicant to
route the documentary credit through its bank. However, the issuing bank may not have been in a correspondent banking relationship with that bank, so it may have advised it through its own branch or another correspondent
for further routing through the named bank.

The issuance and handling of a transferable credit are covered in more detail in Chapter 19.
4.4 Terms used in documentary credits and/or UCP 600
4.4.1 UCP 600, Banking day
UCP 600, article 2, defines banking day’ as follows.

An important aspect of this definition lies in the use of the word ‘regularly’. For example, if a bank is regularly open Monday to Friday, and also opens on a Saturday, but only to perform general banking services, Saturday is
not considered a banking day for UCP purposes. If, however, the same bank were open on Saturday for a half or full day to perform the handling of documentary credits, either would count as a banking day.
4.4.2 Complying presentation
UCP 600, article 2, defines ‘complying presentation’ as follows.

It should be noted that the reference to ‘international standard banking practice’ does not refer exclusively to the ICC publication of the same name (ICC Publication No. 745, or ISBP 745). The phrase clearly encompasses
the practices described in that publication, but it also extends to other practices as determined by the ICC in its official opinions and DOCDEX decisions, and to established procedures that may apply between two or
more countries and which can be equally described as representing such practice.

4.4.4 (Documentary) Credit
UCP 600, article 2, in the context of an irrevocable undertaking, defines ‘credit’ as follows.

A documentary credit that is available by negotiation is the most common form of issuance today.
Both honour arid negotiation are covered in more detail in Chapter 1 7 of this study text.
4.4.7 Presentation
UCP 600, article 2, defines ‘presentation’ as follows.

The definition contemplates two different uses of the term: the first part
of the definition refers to the actual delivery of the documents to the bank;
the second part refers to documents that have already been delivered and
are in the bank’s possession.
4.4.8 Presenter
UCP 600, article 2, defines ‘presenter’ as follows.

The definition of presenter is most relevant in the context of UCP 600, article 16, and the need for a refusal notice to be sent to the presenter. The presenter may or may not be the beneficiary of the documentary credit.
Multiple Choice Questions(MCQ):
1. It is possible for an issuing bank to also be an applicant.’ Is this statement true or false?
A. True
B. False .

2. ‘A documentary credit is always advised by the use of the SWIFT MT700.’ Is this statement true or false?
A. True
B. False.

3. ‘An applicant is a party to a documentary credit.’ Is this statement true or false?
A. True
B. False

5. Which of the following is not a form of honour’?
A. Acceptance
B. Deferred payment
C. Negotiation
D. Payment