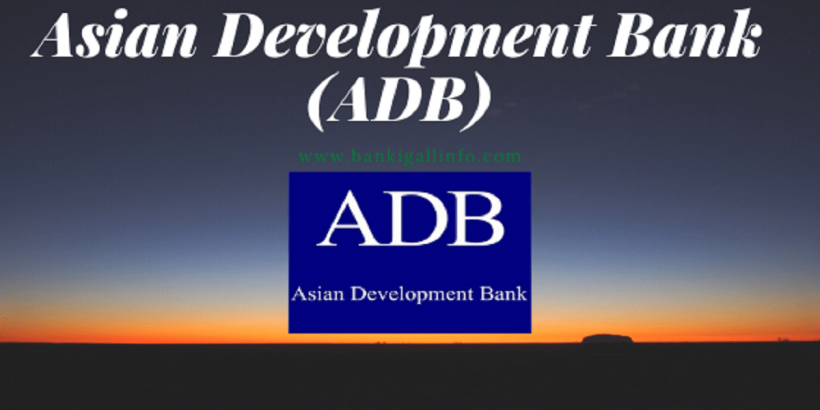 ADB is the acronym of Asian Development Bank

The Asian Development Bank established in 1966  to develop to improve the quality of life for millions in Asia and the Pacific. By targeting investments wisely, in partnership with our developing member countries and other stakeholders.
Through investment in infrastructure, health care services, financial and public administration systems, or helping nations prepare for the impact of climate change or better manage their natural resources, ADB is committed to help developing member countries evolve into thriving, modern economies that are well integrated with each other and the world.

From 31 members at its establishment in 1966, ADB has grown to encompass 67 members – of which 48 are from within Asia and the Pacific and 19 outside.

BANK
The Royal Bank of  Scotland(RBS) The Royal Bank of Scotland(RBS) Group plc is a holding company of a global banking and financial services group. The Company operates in the United …
SoftBank Group Corp.
SoftBank Group Corp. SoftBank was established in Tokyo, Japan, on September 3, 1981. In May 2015, SoftBank was ranked in the Forbes Global 2000 list as the 62nd largest public …
The ING Group (Dutch: ING Groep) is a Dutch multinational banking and financial services corporation Its headquarter is in Amsterdam. Its primary businesses are retail banking, direct …
UBS AG
UBS AG is a Swiss global financial services company. Its headquarter is in Basel and Zürich, Switzerland. It provides investment banking, asset management, and wealth management services…
Mizuho Financial Group
Mizuho Financial Group Mizuho Financial Group, Inc. abbreviated as MHFG, or simply called Mizuho is a banking holding company. It,s headquarter is in the Ōtemachi district of Chiyoda, Tokyo, Japan. …
Societe Generale
Societe Generale S.A. (SocGen) is a French multinational banking and financial services company. Its headquarter is in Paris. The company is a universal bank split into three main …
Banco Santander
Banco Santander is the sister concern of The Santander Group. Which is a Spanish banking group centered on Banco Santander, S.A. It is the largest bank …
UniCredit work as the company has its registered office in Rome and general management in Milan.UniCredit’s core markets are Italy, Austria, Russia, and Southern Germany. It also …