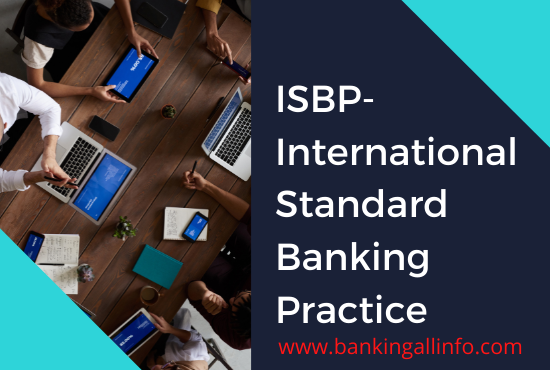 The ISBP is a checklist of best practices worldwide for checking documents under the UCP, ICC’s universally used rules on letters of credit.
Because the UCP rules are general in nature, it was necessary to define in greater detail the term “international standard banking practice”, first found in UCP 500 sub-article 13 (a), the previous version of the UCP.
International Standard Banking Practice

The ISBP, which was revised in 2007 as ISBP 681, is credited with dramatically reducing the number of discrepancies between banks dealing with documentary credits. The ISBP addresses a range of subjects, for example, typing errors, mathematical calculations, drafts and how they are drawn, description of the goods in invoices and signing of bills of lading, among others.
In light of comments from users, the banking commission has decided to both update and expand the current ISBP to take in a range of new topics ‒ such as transfer, amendments, etc., that are not covered in ISBP 681. The new revision will relate to ICC’s latest revision of the UCP, UCP 600.

Anti-Money Laundering (AML)
This Working group composed of more than 60 high-level experts in the AML field provides a business viewpoint on anti-money laundering regulatory initiatives.
Money laundering
In October 2007, the Financial Action Task Force (FATF), formally invited ICC to provide feedback on a recently issued FATF guidance paper relating
to proliferation financing and activity-based financial prohibitions
pursuant to the United Nations Security Council Resolution (UNSC) 1737.
Consequently, a Task Force on Anti Money Laundering was created under the chairmanship of Neil Chantry, Global Head of Policy, Trade and Supply Chain, HSBC. The task force comprises 60 members, including representatives of ICC Commercial Crime Services in London.
A paper was produced and delivered to the FATF in response to their request for comments on the review of the 40+ 9 recommendations and ICC was invited to the subsequent public consultation forums, after which more responses to the FATF review processes were made, culminating in attendance at the Consultation forum in Milan, November 2011 and the Forum in Paris in April 2012 where the rationale behind the new 40 Recommendations was discussed.
The ICC delegation has raised some issues that still affect the trade finance business and is now entering into dialogue with the FATF secretariat to determine whether the related guidance notes can be modified to address these concerns.
Guidelines on sanctions clauses
The TF also produced guidelines on sanction clauses in trade related products, including letters of credit, documentary collections and guarantees, to draw the attention of the trade finance community to the use and negative impact of sanction clauses on certain trade instruments.
With these guidelines, ICC’s primary intention is to make practitioners aware of the need to be careful in their choice of counterparties or service suppliers and to emphasize that it is their responsibility to ensure that they do nothing that brings into question the irrevocable nature of the credit or guarantee, the certainty of payment, or the intent to honour obligations.
Scroll down to read the paper
Discussion forum for trade and compliance professionals
The TF continues to act as a key review and discussion forum for trade and compliance professionals looking at the impact on trade and the mitigants that could be utilized to comply with regulation and still keep trade credit flowing and as a platform for educating practitioners about the relationship between sanctions and the ICC Rules.
Counter Terrorist Financing / Financial Crimes Group (“CTF/FC Group”)
Stemming from the AML Task Force, the BC also created the Counter Terrorist Financing and Financial Crimes Group to handle new mandates in the area of AML, financial crimes and proliferation financing.
This group’s responsibilities and work plan include:
Draft responses to the FATF Review of Standards/ calls for comment, a role taken on due to the response time frame requirements of the public consultation rounds.
Guidance to ICC Members on KYC standards, especially relating to Correspondent banks.
Draft a paper on the problems relating to the falsification of information on Bills of Landing to beat sanctions, either relating to vessel names etc and final destinations
Provide inputs to Anti-Corruption issues (in consequence of the UK Corruption Act 2010
Enhance collaboration with the Wolfsberg Group & FATF to ensure consistent industry positioning on these important matters.

What do you know about “Certificates of origin ”as per ISBP?