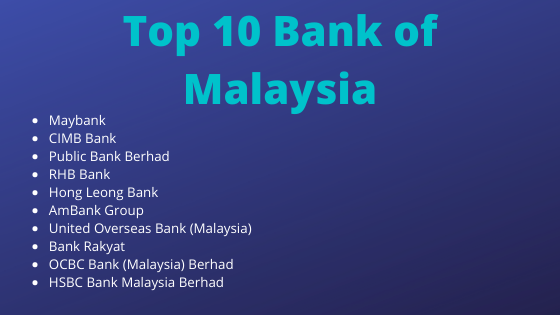 Maybank is the largest bank in the country in terms of total assets and market capitalization. It is also one of the largest banks in Southeast Asia. It provides a wide range of banking products and services through its extensive network of 2,400 offices, spanning 10 ASEAN countries and global financial centers.

In 2015, Maybank was ranked 95th in The Banker’s Top 1000 World Banks. Maybank Islamic, the bank’s Islamic banking arm, is the top Islamic bank in the Asia-Pacific region. It is also the world’s fifth largest Islamic bank by assets. Maybank was founded in 1960, with headquarters in Kuala Lumpur.

CIMB Bank is the consumer banking unit of the CIMB Group. The universal bank provides banking services including consumer and wholesale banking, strategic investments, and treasury and markets through a network of 1,080 branches.

Aside from Malaysia, the bank’s core markets include Singapore, Thailand, and Indonesia. Established in 2006, CIMB Bank is based in Kuala Lumpur, serving more than 13.5 million customers across the country.

3. Public Bank Berhad
Founded in 1966, Public Bank Berhad is one of the largest banks in Malaysia, as well as in Southeast Asia. It is the country’s largest bank in terms of shareholders’ funds and the second largest in market capitalization. Headquartered in Kuala Lumpur, the bank offers a range of products and services such as personal and commercial banking, investment banking, Islamic banking, sale and management of unit trust funds, share brokering, and insurance.

RHB Bank provides a wide array of financial products and services through its numerous subsidiaries. Aside from Malaysia, it serves Singapore, Thailand, Vietnam, Cambodia, Brunei, Laos, Indonesia, and Hong Kong. In 1994, it was incorporated as a public limited company in Malaysia, then changed its name to RHB Bank in 1997.
The RHB Islamic Bank Berhad was established in 2005 by the RHB Banking Group, the first domestic financial institution to create an Islamic banking subsidiary. The group currently employs 11,651 staff and manages 278 branches/offices.

One of the largest banks in Malaysia is Hong Leong Bank Berhad, a major publicly listed banking group in the country. It provides banking services to clients in Malaysia, as well as in China, Hong Kong, Singapore, Vietnam, Cambodia, and the US.

Based in Kuala Lumpur, Hong Leong Bank was established in 1905 as Commerce International Merchant Bankers. The bank is part of the Hong Leong Group, which offers diversified businesses in financial services, property, manufacturing, and infrastructure development.

Based in Kuala Lumpur, AmBank Group provides retail and wholesale banking, Islamic banking, and insurance services in Malaysia. The bank operates through a network of 175 branches and 884 ATMs. It also trades under different brands such as AmInvestment Bank, AmInvest, AmMetLife, and AmGeneral Insurance.

Singaporean multinational banking group, United Overseas Bank Limited (UOB), provides a range of banking services such as commercial and corporate banking, personal finance, asset management, investment, corporate finance, and insurance.
UOB oversees a network of 68 branches in Singapore and over 500 offices over 19 countries in the Asia-Pacific region, as well as in Western Europe and North America. The bank was founded in 1935 as United Chinese Bank (UCB).

Bank Kerjasama Rakyat Malaysia Berhad, or Bank Rakyat, is the largest Islamic cooperative bank in Malaysia. It is an entity that is governed by the Ministry of Domestic Trade, Cooperatives, and Consumerism since 2004. It was established in 1954 after the merger of 11 union banks in Malaysia under the Cooperative Ordinance 1948.
Through its 147 branches, Bank Rakyat provides a range of products and services, including consumer banking, commercial financing, and investments. Its headquarters is in Kuala Lumpur.

OCBC Bank (Malaysia) Berhad is a subsidiary of Oversea-Chinese Banking Corporation Limited or OCBC, the oldest local bank in Singapore. The bank provides a range of financial solutions including consumer and business banking, investment, Islamic banking, and treasury.
Operating through over 40 branches, it is one of the largest foreign banks in Malaysia in terms of assets.

A subsidiary of HSBC Holdings plc, HSBC Bank Malaysia Berhad is the largest foreign-owned bank in the country, with a network of over 60 branches nationwide. Incorporated in Malaysia in 1994, the bank offers Islamic financial services, including personal and commercial banking. In 2007, it set up HSBC Amanah Malaysia Berhad, its Islamic banking subsidiary.
Revenue: RM 2.39 billion (2016)