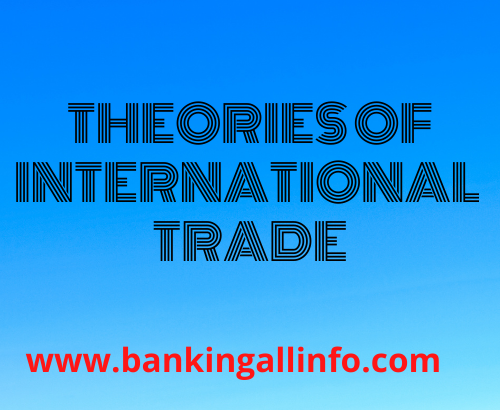 People or entities trade because they believe that they benefit from the exchange. They may need or want the goods or services. While at the surface, this many sound very simple, there is a great deal of theory, policy, and business strategy that constitutes international trade.

There are 6 economic theories under International Trade Law which are classified in four:

Theories details are given below:

This theory was popular in the 16th and 18th Century. During that time the wealth of the nation only consisted of gold or other kinds of precious metals so the theorists suggested that the countries should start accumulating gold and other kinds of metals more and more. The European Nations started doing so. Mercantilists, during this period stated that all these precious stones denoted the wealth of a nation, they believed that a country will strengthen only if the nation imports less and exports more. They said that this is the favorable balance of trade and that this will help a nation to progress more.

Mercantilism thrived during the 1500’s because there was a rise in new nation-states and the rulers of these states wanted to strengthen their nations. The only way to do so was by increasing exports and trade, because of which these rulers were able to collect more capital for their nations. These rulers encouraged exports by putting limitations on imports. This approach is called protectionism and it is still used today.

Though, Mercantilism is one the most old-fashioned theory, it still remains a part of contemporary thinking. Countries like China, Taiwan, Japan, etcetera still favor Protectionism. Almost every country, has implemented protectionist policy in one way or another, to protect their economy. Countries that are export oriented prefer protectionist policies as it favors them. Import restrictions lead to higher prices of good and services. Free-trade benefits everyone, whereas, mercantilism’s protectionist policies only profit select industries.

This theory was developed by Adam Smith, he was the father of Modern Economics. This theory came out as a strong reaction against the protectionist mercantilist views on international trade. Adam Smith supported the necessity of free trade as the only assurance for expansion of trade. He said that a country should only produce those products in which they have an absolute advantage. According to Smith, free trade promoted international division of labour. By specialization and division of labour producers with different absolute advantages can always gain over producing in remoteness. He emphasised on producing what a country specializes in so that it can produce more at a lower cost than other countries. This theory says that a country should export a product in which it has a cost advantage.

Adam’s theory specified that a country’s prosperity should not be premeditated by how much gold and other precious metals it has, but rather by the living standards of its citizens.

The comparative cost theory was first given by David Ricardo. It was later polished by J. S. Mill, Marshall, Taussig and others. Ricardo said absolute advantage is not necessary. He also said a country will produce where there is comparative advantage.

Comparative advantage arises when a country is not able to yield a commodity more competently than another country; however, it has the resources to manufacture that commodity more proficiently than it does other commodities.

Smith and Ricardo’s theories didn’t help the countries figure out which products would give better returns to the country. In 1900s, two economists, Eli Hecksher and Bertil Ohlin, fixated on how a country could profit by making goods that utilized factors that were in abundance in the country. They found out that the factors that were in abundance in relation to the demand would be cheaper and that the factors in great demand comparatively to its supply would be more expensive.

The H-0 Theory is also known as the Modern Theory or the General Equilibrium Theory. This theory focused on factor endowments and factor prices as the most important determinants of international trade. The H – 0 is divided in two theorems: The H – 0 theorem, and the Factor Price Equalization Theorem. The H – 0 theorem predicts the pattern of trade while the factor-price equalization theorem deals with the effect of international trade on factor prices. H – 0 theorem is further divided in two parts: factor intensity and factor abundance. Factor Abundance can be explained in terms of physical units and relative factor prices. Physical units include capital and labor, whereas, relative factor price includes the adjoining expenses like rent, labor cost, etcetera. On the other hand, factor intensity means capital, labor or technology, etcetera, any factor that a country has.

The diamond theory was given by Micheal Porter. This theory states that the qualities of the home country are vital for the triumph of a corporation. This theory was given its name because it is in the shape of a diamond. It describes the factors that influence the success of an organization. There are Six Model Factors in this theory which are also known as the determinants.

The following are the determinants:

In the 1960’s this was a very useful theory. At that time, United States of America was dominating the whole globe in terms of manufacturing after the World War II.

The stage begins with introducing a new product in the market. A corporation will begin from developing a new good. The market for which will be small and sales will be comparatively low. Vernon assumed that innovation or invention of products will mostly be done in developed nations, because of the economy of the nation. To balance the effect of less sales, corporations would keep the manufacturing local. As the sales would increase, the corporations would start to export the goods to different nations in order to increase the revenue and sales.

The product enters this stage when it has established demand in developed nations. The manufacturer, would need to open manufacturing plants in each nation where the product has demand. Due to local production, labour costs and export costs will decline which will in result reduce the per unit cost and increase the revenue.

This stage may include product development. Demand for the product will continue to rise in this stage. demand can also be expected from less developed nations. Local competition with other cooperation’s will begin.

In this stage exports to nations various developed and under developed nations will begin. Foreign product competition will reach its peak due to which the product will start losing its market. The demand in the nation from where the product originated will start declining and eventually diminishes as a new product grabs the attention of the people. The market for the product is now completely finished.

Then, the cycle of a new product begins.

The theories discussed above have aided economists, government and industries to comprehend trade internationally in a healthier way.

The mercantilists view dominated in the 17th and 18th century. Mercantilists held that trade is not free and its main was to achieve surplus. However, they failed to address various issues. Adam Smith opposed the Mercantilist Theory and highlighted the importance of free trade in increasing the prosperity of nations. Smith’s theory was criticized by David Ricardo and others. According to Ricardo, each nation should focus in the production of those goods that yield the most. Heckscher – 0hlin explained the basis trading in respect to factor endowments. Vernon’s theory scrutinized the effect of technical changes on the pattern of international trade.

The Mercantalists theory, Cost Adavantage and Comparative Advantage theory assumed only two commodities, factors and countries, and the rest of the factors as constant. On the other hand, the New theories that consists of Product Life Theory and Porter’s Diamond are based on more explainable assumptions, that talked about changes in factors. Therefore, the new theories are better at explaining the pattern of world trade today.