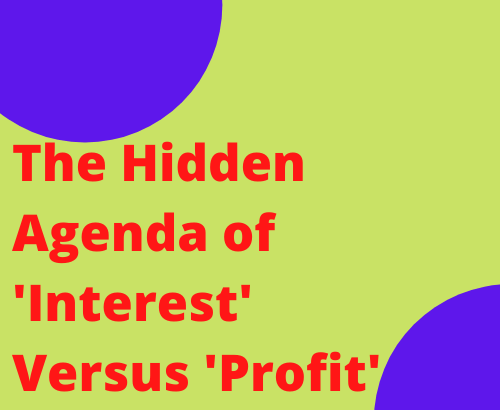 The Hidden Agenda of ‘Interest’ Versus ‘Profit’

The Hidden Agenda Of ‘Interest’ Versus ‘Profit’

Banks are an essential component of the present day world-individuals as well as public and private institutions can hardly operate without the institution of banking. Commercial banking as we find it today had evolved over time and has become a stable institution with commonly understood practices accepted all over the world.

The modern banking system is, in fact, the representative of the very evil of interest, which through exploitation, and extortion sucks the blood of mankind and by creating inflation it breaks the backbone of man’s economy. The international banking system discourages trade through embargoes and encourages interest.

It is a fact of life that despite the severe condemnation of interest in Islam, Muslim societies were unable to keep away from interest-based transactions when modern banks appeared on the scene. The reason for this is to be found in the military and political subjugation of a large part of the Muslim world by the Western colonial powers, which foisted alien financial practices on the Muslim people. They drift away Islamic teachings, especially on the part of sizeable segments of well to do and educated classes under the Western influence, was also a factor in the passive reaction to the inroad of the institution of interest in Muslim societies.

The term Bank is defined as “acceptor of deposit in the form of ‘money’ for the purpose of lending or investment.—P.N. Varshney, 1999, Banking Law and Practice, Suntan Chand & Sons, 7th revised edition, p.23

Commercial bank is a financial institution, which accepts ‘money’ as deposits must be for the purpose of lending or investment. They are the main sources of revenue of a commercial bank.–HL.Bedi & V_KHardikar, 1999, Practical Banking Advances,UBS Publishers & Distributors Ltd., New Delhi, India, reprint, p. 15

It is well known that Jews used to give ‘money’ loans with interest’. The interpretation is supported by a report by Al-Waqedi in respect of Bani A Nadeer that Abu Rafe’ Salam bin Abu A-Haqiq owed assayed bin Hadeer 120 dinars payable after one year. He then reached an agreement with Assayed to repay the principal was 80 dinners and to discount the interest.—Waqedi, undated. Kitab AL Maghazi, Idaratul Ma’aref, Beirut, Lebanon, vol. 01, p.347

This means that amount the Prophet sallallahu alaihi wasallam said should be reduced was the excess i.e. interest. Yet the incident of Bani Al-Nadeer, which prompted this saying. took place in the second year after Hijrah i.e. 675 A D. , Therefore Qurenic verse banning interest was revealed —Ridha Sa’adallah, Decennber 1994, P.91

Perhaps interest has been the most controversial topic in the whole theory of distribution. Economists have differed regarding the nature of interest as well as how it is determined in fact. the subject of interest is still an unsettled question of economics.

Just as ways, ‘interest’ is the price of the service of labor, similarly, interest is the price of ‘money’. It expressed as a percentage return on money invested after for risks of investment.—E.F Merchantilism undated, volume 11, p.200

Prohibition of Interest in the Quran and Hadith:

O  you who believe! fear Allah. and give up what remains of your demand for ‘interest’, if you are indeed believers.

If you do it not, take notice Of war from Allah and His Messenger. But If you turn back, you shall have your capital sums. Deal not unjustly and you shall not be dealt with unjustify–Al Baqara 278-279

The threat is frightening enough to make a Muslim catch his breath at the anger , which it reflects but this is not the only sin with reference to which this expression has been used. The expression of extreme anger accompanied by devastating threats coming from the Almighty could not but make the Muslims extremely anxious to remain at a distance, at any cost, from involvement in any transaction, which had the semblance of ‘interest’. The nobler of a soul was the less willing it must have been to accept the responsibility of finding relaxation by expanding the niceties of a behest Of this frightening nature, That anxiety can be felt below the surface of the following observation of Umar, the Great, radi Allahu anhu : “The verse of interest or the verse which forbids interest is among those, which were revealed during the last days of the Prophet sallallahu alaihi wasallam. He passed away before explaining its implications.– Late Abu’ Ala Moududi, 1977, P.179

The prohibition of ‘interest’ is an issue concurred not only by Islam but almost all the religions of the world and the majority of ancient philosophers as well as modern scholars end thinkers.

The Greek and Roman thinkers had also forbidden it in their day and that it had been similarly prohibited by the Bible-the scripture of the western nations. But the Jews have always and every-where striven to transgress the limits imposed upon them by their religion and Christians have followed them. In this field, the easiest step taken is the christening if interest.

Lending ‘money’ at ‘interest’ was forbidden by the Greeks, Aristotle, whose powerful indictment greatly influenced the later generations condemned the taking and paying of interest, in a very strong word?

He compared ‘money’ to a barren hen. which laid no eqqs.

According to Aristotle, the sole subject of the use of money was to facilitate exchange and the fuller satisfaction of human wants.

According to him, this was the most natural purpose of money. Money could not be used as the source of accumulation i.e. to Increase at ‘interest’. So accumulating money at interest was the mMost of all the ways of making money. A piece of ‘money’ can not be get another piece was the doctrine of Aristotle. The obvious conclusion was that ‘interest was unjust. Plato too condemned interest’.

Keynes finally admits that a property run community may be able to bring down ‘the rate of interest’ to zero. it seems to us that Keynes being the victim of his environment does not take enough courage in his hands to condemn outright the charging of interest, to which conclusion his theory naturally leads him. There is no escape from conclusion that ‘fixed rates of Interest’ are highly detrimental to world progress.

Keynes believes that one of the main causes of the world’s poverty of resources is the high premium attached to ‘money’ Anwar Iqbal Qureshi, Islam and the Theory of Interest. Ashraf Publications, Pakistan, 1974, pp.33-39

In this regard to Islamic banking, the Quran and Hadith have given clear and implicit guidelines that Its operations should be free from any element of ‘interest’.

The Prophet sallallahu alaihi wasallam in his early life used to be a trader and, similar to many of his eminent companions, was a Businessman. From the religious perspective, the establishment of Islamic banks considered a righteous move for two reasons :

Firstly, its existence is in line with the divine revelation, i.e. to involve In trade.

The concept of ‘money’ is difficult to define It belongs to the category of things which are not amendable ta any single definition.

Initially goods and services were simply exchanged for goods and services, which may be called barter system in the modern banking arena. Due to double coincident of wants, medium of exchange system has been introduced. which’s now called ‘money’

‘Money’ is not a thing like gold or paper. ‘Money’ is not what it is but it does.–G. Lucket Dudley, 1984, Money and Banking. Mc.Graw Hill Book Company, Singapore, International ed., p.238

‘Money’ acts as lubricant that facilitates exchange to gear up the production of process. So it is termed as the life-blood of an enterprise. Now people exchange money for goods and goods for Money. They do not directly exchange goods for goods.—Michael Pakrin 1990, Macro Economics, Wesley Publishing Company, USA. pp.247-251

‘Money’ should have some intrinsic value. Where from the debate starts among the scholars on the issue that whether the paper money is money or not?

‘Money’ has no intrinsic utility. It cannot be utilized in direct fulfillment of human needs. It can only be used for acquiring some goods or services. Therefore, all the units of money of the same denominations are hundred percent equal to each other.—Justice Mohammad Taqi Usmani, 2001, The Text of the Historic Judgement of Riba (Interest), The Other Press, Petaling Jaya, Malyasia, p.80

The Islamic view about loans is that it should be given or taken, free of change, to meet any contingency and that the creditor should not take any advantage of the borrower.

A loan is the transfer of fungible goods, i.e. goods that may be measured in terms of weight, measure or number, whose equivalent Is to be returned without any premium. Loan is an act of Charity.

Repayment of a loan can neither be increased over nor decreased below the loan it-self. Deferment in loan in fact is merely a donation And a promise and it is not, therefore, obligatory to observe it—Abdullah bin Muhammad bin Ahmad bin Muhammad Qudama, 1970, P117.

Some modern Muslim scholars qualify the ‘fungible goods’ are those goods, services of which cannot be separately used, keeping its existence unchanged. Like rice. Money, etc. when ‘non-fungible goods’ are quite reverse in nature i.e. which can give repeated return. Viz. different items of the Decorator.

What is Islamic Bank ?

An Islamic bank is a financial institution that operates with the objective to implement and materialize the economic and financial principles of Islam in the banking arena.

The organization Of Islamic Conference (OIC) defines an Islamic Bank as “a financial institution whose statutes (i.e. legislative enactment), rules and procedure expressly state its commitment to the principal of Islamic Shariah and to the banning of the receipt and payment of interest on any of its operations”.

Islam permits trade and commerce but strictly prohibits interest only those principles. Which permit risk-return sharing between providers and users funds can be considered strongly Islamic. Interest In any form is a manifestation of injustice

Exploitation, hard-heartedness and cruelty. Interest is not in the Interest of humanity Interest makes the money a commodity and an End in itself. Speculative transactions gain Currency. The jungle rule Like survival of the fittest becomes order of day But. Interest-free Commercial banking is yet take off for want of conversion of Interest free principles into Interest-free practices.—Mohammed Sayeed Shingeri, 2000, A Model of Pure Interest-Free Banking, Synergy Books International, Kuala Lumpur, Malyasa, pp.oe-12

The term ‘profit’ has three meanings

‘Profit’ is the reward of the entrepreneur, rather of the ‘Profit’ differs from the return on other Factors in three important respects.

According to many Muslim scholars, “Profits are in fact, rewards for taking risks”. It is obvious that, in order to realize ‘profit’, income is necessary, which depends upon production or earnings. Production or earning, which is a form of business, which involves risk, time, service, expertise, labor and uncertainty.

In conclusion, I should say that one should have an explicit faith in the injunctions of the Quran end Sunnah and should not allow one’s thinking to be influenced by the corrupt practices. The precepts set by Islam are still the best. I firmly believe that the science of today may become the mythology of tomorrow and that what the Quran has said, we may not understand today, but it is likely to become quite clear to us tomorrow.

Never Knew About ‘Interest’ Versus ‘Profit’

How To Use The Interest Rate Swap