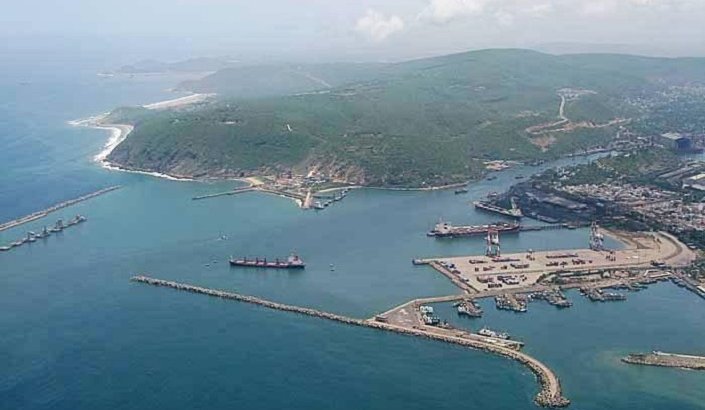 How many sea port are there in India?
There are thirteen(13) sea port in India at present.

How many Minor Sea port in India?
There are about 200 notified  Minor seaports in India.

1. Kandla Port (Gujarat)
Situated in the district of Kachchh in Gujarat, this port is the possibly busiest port. It was built in the 1950s after the partition of India and Pakistan as the Karachi port on the western coast belonged to Pakistan now. The port is considered as the richest seaport in India.

It is located in the Kandla creek thereby deriving its name from there. Some of the commodities which are traded are – iron machinery, petroleum, salt, textiles, chemicals, grains, etc. This port is known for handling much of the crude oil imports in India.

2. Nhava Sheva /Jawaharlal Nehru Port (Maharashtra)
Situated in Navi Mumbai, this port is the largest container port in India, handling almost about 56% of containers of all major ports. It was built in 1989 and is currently under complete government control.

This port is located on the eastern shore of Mumbai harbor off Elephanta Island and is accessed by the Thane creek. It is also considered as one of the busiest ports in the country.

Some of the commodities transported via this port are textiles, carpets, boneless meat, chemicals, vegetable oils, etc.

3. Mumbai Sea Port (Maharashtra)
Situated in Mumbai, this is the largest port in India. Initially, this location was used by the navies of Shivaji. This is one of the oldest modern ports in India. There is 10-12 m availability of the sea surrounding the port, thereby making the ships easier to enter the port.

It is believed that this port is responsible for taking care of one-fifth of the nation’s total foreign exports. This port trades with western as well as with east-African countries.

4. Visakhapatnam (Andhra Pradesh)
Situated in Visakhapatnam, in the southern state of Andhra Pradesh, this port was inaugurated in 1933 by Lord Wellington. This port is known for handling bulk Cargo on the eastern coast. The port alone handles 1.2 tonnes of cargo every single year.

The port is divided into 3 harbors – outer, inner, and fishing harbor. Some of the common goods transported via this port are – aluminum, oil, iron ore, etc. It is one of the oldest ports in India. It is also the second-largest port in the country in terms of cargo handling.

5. Marmagao Port (Goa)
Located in south Goa in Alto Desterro, Mormugao, it is a leading iron ore exporter port. The port is also a tourist spot. It is one of the earliest ports in India. The Konkan railway has hyped up the popularity of this port.

Some of the common goods transported are – iron ores, coconut, manganese, cotton, and other nuts. It is one of the most serene and laidback ports of India.

6. New Mangalore Port (Karnataka)
It is located at a site called Panambur in Karnataka at Gurupura river confluence with Arabian Sea. It is located in the north of the Gurupura river. The port started on a small scale, constructing accommodation for small ships.

However, after the Fourth Five Year, the port upgraded to accommodating bigger ships as well. A harbor has been built around this port situated in southern Karnataka to help manage the business around the port.

Some of the common goods that are transported here are – tea, coffee, oil, fish, rubber, crude oil, fertilizers, etc.

7. Chennai Port (Tamil Nadu)
Situated in Chennai, Tamil Nadu, it is the largest port along the Bay of Bengal and the second largest port in India after the Mumbai Port. Dating back to 1881, it is the third oldest port in the country. The port handles around 100 million cargo as per the statistics around 2015-16.

It is situated along the Coromandel Coast and is the main source of import and export in the state of Tamil Nadu. Belonging to the Chennai Port Trust, this place has quite a few lighthouses.

8. Cochin Port (Kerala)
It is located between the Willingdon island and Vallarpadam island on the South-West coast of India. This is one of the largest ports in the country and it is located on the crossroads of the East-West Ocean Trade.

It has an important connecting significance for both the Arabian Sea and the Indian Ocean. It processes the largest transshipment facility in India. Cochin Shipyard, Kochi Marina, and Kochi refineries are tourists’ spots as well.

9. Haldia Port (West Bengal)
Situated in Haldia, West Bengal, it is the only riverine port in India. It is the biggest port situated in this state and is 128km inland from the Bay of Bengal. A busy port, it handles shipments from New Zealand, Southeast Asian countries, and Australia as well.

Since this port is old, it lacks in maintenance at times. The water around this port is continuously declining hence it is an alarm. It is known for its twin dock system – Kolkata Dock System (KDS) on the eastern bank and Haldia Dock Complex (HDC) on the western bank of the Hooghly river.

10. Port Blair (Andaman and Nicobar Islands)
Situated in Port Blair, Andaman, and the Nicobar Islands, this is the 13th and youngest major port of India as declared in 2010. It plays an important role in the Indian economy. The port is at a strategic location.

It is near to the two international shipping lines – US-Singapore and Saudi Arabia-Singapore. Even though it is the most recent port, and does not have a lot of experience, it is still considered in the 13 major seaports in India due to its location and economic benefit.

11. Tuticorin Port (Tamil Nadu)
Situated in Tamil Nadu, it is now renamed as V.O Chidambaranar Port. It is located in the Gulf of Mannar. It is the only port in South India to provide weekly container service to the United States. Also It is an artificial deep-sea harbor.

This port is the second-largest port after the Chennai Port in the state of Tamil Nadu. It is also one of the largest container terminals when it comes to the ports in India. Some parts of the port used to be dedicated to maritime trade and pearl fishery.

12. Paradip (Orissa)
Located at the confluence of the Mahanadi river in the Bay of Bengal in Orissa, it was the first seaport located on the Eastern coast of India commissioned in independent India. Situated 100 km east of Cuttack, it is a weather port.

The port is surrounded by a depth of 12m – thereby holding containers weighing more than 60,000 DWT. It was constructed with the Second Five Year plan period, thereby gaining importance over time. Some of the important components transported here are – iron ore, coal, and some of the other dry cargo.

13. Ennore Port (Tamil Nadu)
Situated around 24 km away from the Chennai port, this is now named as Kamarajar Port Limited. It is the first corporate sea ports in India and is registered as a public company with a 68% stake held by the government.

It is one of the most easily accessible ports as this port is connected by roads and railways. This port is mainly responsible for handling coal. It transports around 16 million coal every year.

14. Vizag Port (Andhra Pradesh)
This port is situated in Visakhapatnam itself in the southern state of Andhra Pradesh. It is considered as one of the oldest shipyards in the country. It is also the second-largest seaport in handling cargo materials.

Dolphin Nose hill is situated on the east coast of this port. This enables in protecting the port from any natural calamity which might strike all of a sudden.

List of all the acts related to bank in india