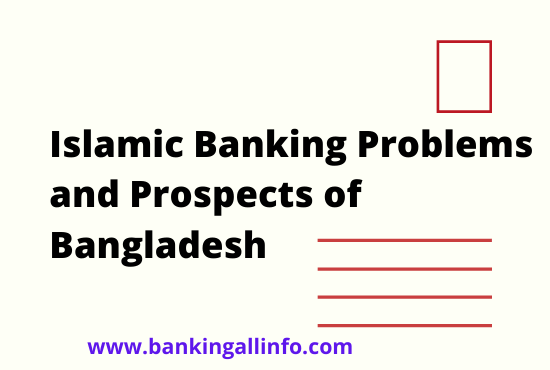 To know Islamic Banking Problems and Prospects of Bangladesh at first we should have to know what is Islamic Banking.
What is Islamic Banking
A banking is a systematic process of financial activities of an organization. Islamic banking is a process where as all activities of banking will be run by the Islamic Shariah.The Shariah is the system of Islamic laws, based upon the Quran and the teachings of the Prophet Muhammad (pbuh) that tells Muslims what is allowable and what is forbidden. Another name for the Shariah is simply, “Islamic law.”
Islamic banking is the prohibition of the collection and payment of interest,usury  riba or ribaa. This is an absolute prohibition, applying equally to governments, banks, investment funds, corporations and individuals. Islamic banking main objectives to avoid interest of all financial transaction of banking arena.To ensure the buying and selling for every deal of investments.
Islamic Banking is profit sharing and partnership organization. All Islamic Banking products are necessarily based on the Shariah or are Shariah compliant. The former means that there are evidences from the Quran and the Sunnah for the legitimacy of those products. The latter are products derived from other rulings or products that do not oppose the Sharee’ah in any way.
Islamic Banking Area of Bangladesh:
There are 56 (Fifty Six) banks are working in Bangladesh including eight full flagged Islamic bank.
Eight Islamic banks operating in Bangladesh are :

Problems of Islamic Banking in Bangladesh

The Authorized Capital of the Bank is 20,000.00 Million and Paid-up capital is 16,099.90 Million in 31/12/2015 The Bank is managed by 23-member Board of Directors elected by the shareholders, An Extensive committee consisting of 8 Directors and a Management Committee consisting of the top Executives of the Bank also oversee the day-to-day function of the Bank. A representative from the Shariah Council also take part in the above committee. Powers and functions are suitably distributed amongst these bodies. The bank has also a 10 -member Shariah council consisting of Fuquah, Islamic Economists and a Lawyer. The
council gives decision on Islamic issues, which are generally followed in the Bank. The Council conducts audits the operation of Bank branches each year on selective basis and put forward report identify the deviations and suggestions for purification of the banking transactions. Besides these committees and Council, types of activities for improvement of the Bank’s overall position.
3. Al-Arafah Islami Bank Limited:
Al-Arafah Islami Bank Limited was incorporated in June 18, 1995 and started operation as 3rd Islamic bank in the private sector banking in Bangladesh from September 27, 1995. The bank is having an Authorized capital of Tk. 1000 million and paid up capital of Tk. 207.6 million. It renders all types of commercial banking services within the stipulation laid down by banking Companies Act 1991 and directives as received from the Bangladesh Bank from time to time. Bank is managed by 23-member Board of Directors.
International Journal of Islamic Financial Services Vol. 1 No.3
The Bank has a 7-member Shariah council consisting of Fuqaha, lawyers and Islamic Economists. The Council gives its advice in order to ensure that the Bank does not involve any element which is not approved by Islamic Shariah. By August 1998 Al-Arafah Islami Bank opened 21 branches all within the country.
Social Investment Bank Limited (SIBL)
Social Investment bank Limited is a fourth Islamic Bank in Bangladesh. It was incorporated on 5 thJuly, 1995 and launched its banking operations of 22nd November, 1995. It nature it is a venture bank of some renowned Islamic organizations of the world and the Government of Bangladesh. At the Operational level,
the bank is committed to provide a linkage among the three sectors of the real economy:
a) formal sector;
b) non-formal sector; and c) Islamic voluntary sector.
The authorized share capital of the bank is Taka 1000.00 million divided into one million shares of Taka 1000.00 each At the end of June 1998 the Paid-up capital of the bank stood at Taka 120.00 million. The bank is managed by a 24-member Board of Directors including three foreign directors and its sub-commit-
tee. The bank has also a 8-member Shariah Council consisting of Fuqaha, Islamic Economist and lawyer.
The Council gives decision on Islamic issues which are generally followed in the bank. By June 1998 Social Investment Bank has opened seven branches all within the country.
4. Faysal Islamic Bank of Bahrain EC, Dhaka, Bangladesh
Faysal Islamic Bank of Bahrain EC, Dhaka has obtained permission to open its branch in Bangladesh on
6th March 1997. The bank started functioning with effect from 11 th August 1997. The principal activities of
Bangladesh branch are to provide all kinds of commercial banking services to the customers. All functions
of the bank are performed in strict adherence to the principles of Islamic Shariah. In order to ensure such
conformity to Shariah, the bank’s operations are checked and monitored by its Religious Supervisory
Board (RSB) to whom the management reports periodically. In case of new operations and activities, prior
approval of the RSB is invariably by the Bank Management. The Bangladesh branch will also be monitor-
ing by the same Shariah Board i.e. RSB.
6. Other Foreign Islamic Banks Branches Operating in Bangladesh
Besides the above branch of Faysal Islamic bank of Bahrain E.C., there are three more branches of three
Pakistani Banks have been operating in Bangladesh namely habib Bank Limited, National Bank of Paki-
stan and Muslim Commercial bank Limited. It may be mentioned that in Pakistan, as in evident in many
papers that these banks are operating in accordance with Islamic Shariah. But, unfortunately, here, in
Bangladesh, branches of these banks are operating as conventional banks, so their operations have been
excluded from the purview of this study. Only the activities of Faysal Islamic bank of Bahrain EC is
considered appropriate for this study.
7. Islamic banking in Conventional Banks :
It is appropriate to mention that in the country two conventional banks have taken the initiative of limited
Islamic banking activities within their present conventional set-up. These two banks are prime Bank Lim-
ited and Dhaka bank Limited. The first one has opened two Islamic banks are Prime Bank Limited and
Dhaka Bank Limited. The first one has opened two Islamic banking branches one in Dhaka on 18th December 1997 respectively. The Dhaka Bank Limited had opened an Islamic banking deposit counter at its principal office. Dhaka in 1995 to attract the depositors willing to deposit their money in the interest-free account. But, due to the pressing demand of the customers linked with along with the traditional system.
Prime Bank Ltd. Is the only bank in Bangladesh which is operating branches on both conventional interest-based banking and Islamic shari’ah based banking other traditional banks of the country are being induced by their successful operations to open full-fledged Islamic banking branches.