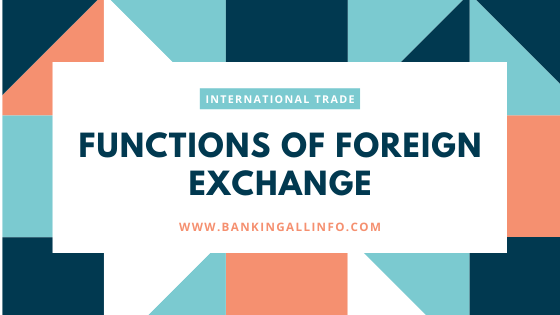 Functions of Foreign Exchange: Commercials Banks have a vital role in the foreign trade of a country. They provide the finance needed to execute the transactions. They from the conduit pipe through which the documents and money are exchanged between the exporter and importer. They act as the extended arm of the Bangladesh Bank in administering the provisions of the Foreign Exchange Regulation Act. For the banks foreign exchange dealing is a specialized activity with good potential for profits. 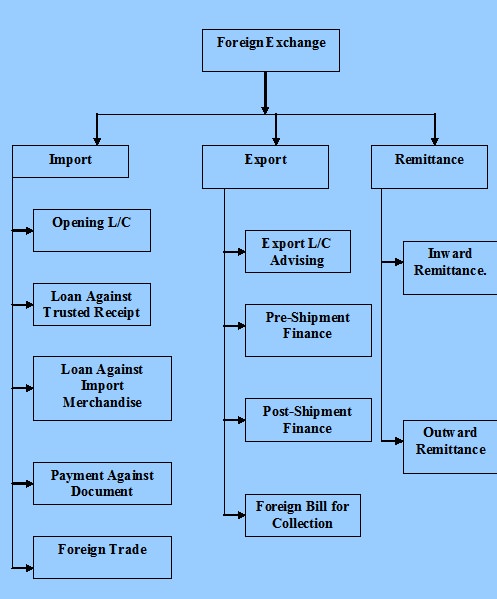 FUNCTIONS OF A FOREIGN EXCHANGE DEPARTMENT:

Foreign Exchange is a highly specialized business and is, therefore, concentrated in selected branches of the bank. In most banks, the decision-making is done at the corporate level. The Foreign Exchange Department, also called the International Banking Division or International Division, is headed by a senior executive of the bank. An in depth knowledge of the rules and regulations of foreign exchange business in particular and banking in general and high level of awareness of the happenings in the international economic and political arena is expected from the Executive heading the department. Since foreign exchange business requires quick decisions, the Executive is vested with enough powers to take decisions on most of the situations that would arise in the dealings of the bank. Matters involving very large amounts and those beyond the discretionary powers of the Executive are referred to the Chief Executive of the Bank or its Board of Directors.

While policy decisions are taken and foreign exchange resources are managed at the corporate level, the actual dealing with the customers takes place at select branches of the bank authorized to deal in foreign exchange. Such branches are mostly concentrated in metropolitan cities and other places where either import or export trade predominated or inflow of foreign remittances is expected to be high. These branches can, however, function only within the guidelines prescribed by the head office, from time to time.

There may also be an intermediary tier at the Zonal or Regional level. In order to decentralize decision-making and reduce the problem of communication from head office to branches spread over the length and breadth of the country, special Department or Cells have been set up at these levels. They perform some of the functions like advising branches on the exchange rate to be quoted to customers, maintenance of foreign exchange balances abroad etc.

The Foreign Exchange Department at the Central/Zonal office or the overseas branch is divided into-well defined sections, each undertaking a specialized activity. Each section is further sub-divided into sub-sections or desks rendering specific tasks. There is no uniformity among banks either in the allocation of the tasks or in the designations of the officers manning the sections and sub-sections. Yet, an attempt is made below to delineate the important functions performed by the foreign exchange department of a bank. The functions are only briefly touched upon as they are elaborated in the lectures that follow.

The importance of international trade in the economy of a country is too well known to need emphasis. A number of advantages flow from international trade. Many developing nations of the world owe their hopes of development on it. A common man, who is not keenly interested in these developments, is still reaping its fruits when he is using many items of common use. A large number of these items are either imported or some components of them are imported. Even if an item is indigenously produced, it may be found that it is made on a machine, which is Imported.

International trade refers to trade between the residents of two different countries. Each country functions as a sovereign State with its own set of regulations and currency. The difference in the nationality of the exporter and the importer presents certain peculiar problems in the conduct of international trade and settlement of the transactions arising there from. Important among such problems are:

Foreign Exchange is the mechanism by which the currency of one country gets converted into the currency of another country. The conversion of currencies is done by banks who deal in foreign exchange. These banks maintain stocks of foreign currencies in the form of balances with banks abroad. For instance, Bangladesh Bank may maintain an account with Bank of America, New York, in which dollar balances are held. In the earlier example, if X Co. pay the equivalent Tk. To Bangladesh Bank, it would arrange to pay Amerexport at New York in dollars from the dollar balances held by it with Bank of America

The rate at which one currency is converted into another currency is the rate of exchange between the currencies concerned. In our illustration, if Bangladesh Bank exchanged US dollars for Bangladeshi Taka at Tk. 84 a dollar, the exchange rate between taka and dollar can be expressed as USD1= Tk. 84/-

Balance of Payments is a record of the value of all transactions between residents of a country with outsiders. It constitutes the result of demand for and supply of foreign exchange for various purposes. Since the rate of exchange between currencies is determined factor in determining the exchange rates. A change in the balance of payments of a country will affect the exchange rate of its currency. It is useful to make a distinction between balance of trade and balance of payments.

Foreign trade, in its broad sense, includes not only visible trade involving import and export of commodities, but invisible items also. These ‘invisible’ items include shipping, banking, tourist traffic, insurance, gifts, interest on investments etc. The shipping, banking and insurance companies of the country render service to other countries for which they receive remuneration. Entrepreneurs setting up business enterprises abroad and supplying services earn profits and salaries. Tourism is another source of foreign exchange when tourists from abroad spend money in the country. Similarly, when all these facilities and services are enjoyed by the resident of the county, it entails outflow of foreign exchange from the country.

As in the case of balance of trade, the total amounts payable and receivable do not equal and the balance of payments for a given period ends up in favourable (surplus) or unfavourable (deficit) balance.

Even before the Second World War ended, the Allied countries began to devote serious thought and efforts in developing a system that would end the chaotic conditions prevailing and pave the way for an orderly conduct of international trade and promote good monetary relations among the countries. They worked with the objectives of finding a system which would (a) help remove the restrictions on trade, (b) ensure free convertibility of currencies (which was suspended during the inter-war period due to multitude of exchange control) and maintain stability in exchange rates among the currencies. In these efforts the USA (represented by Mr. H.D. White) and UK (represented by Lord Keynes) had a greater role to play.

In June 1944, representative of 44 Allied powers met at Brettonwoods, New Hampshire, USA, to give concrete shape to their ideas. The agreement reached at this meeting provided for establishing two institutions which came to be know as the ‘Brettonwoods twins,. The institutions set up were the International Monetary Fund (IMF) and the International Bank for Reconstruction and Development (World Bank).

The Articles of Agreement of the IMF set out the following as the objectives of the fund:

Also known as World Bank, the IBRD is an offshoot of the Brettonwoods Conference of 1944. Its main function is to provide long-term capital assistance to the World Bank concentrated on reconstruction of the war shattered European economies. Later the Bank shifted its focus and ‘Development’ of the backward for lending for development, the world’s capital markets for investment in the developing countries.

The main functions of the Bank are:

The bank has adopted as its principal objective lending for productive projects, which will lead to economic growth in its less development member – countries.