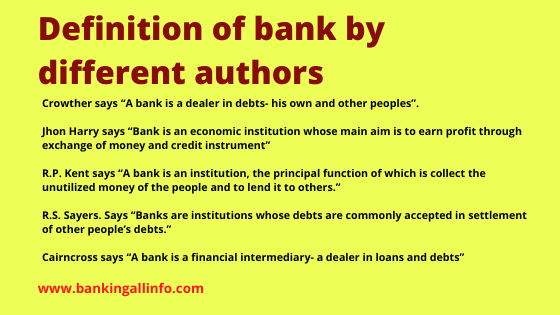 In this Article, you will learn-

The bank is a financial institution or corporation which deals with money and its substitutes; it also provides other financial services. Banks accept deposits and make loans and obtain a profit from the difference in the interest paid to lenders (depositors) and charged to borrowers, respectively.

It is formed for the purposes of maintaining current accounts, savings accounts and checking accounts, issuing loans or advances or investment (Islamic mode) and credit, and dealing in negotiable securities issued by governmental entities and corporations. It makes a link with depositors and customers directly or indirectly.

R.P. Kent says “A bank is an institution, the principal function of which is collect the unutilized money of the people and to lend it to others.”.

R.S. Sayers. Says “Banks are institutions whose debts are commonly accepted in settlement of other people’s debts.”

“A bank is an establishment which trades in money, an establishment for deposit, custody, and issue of money and also for granting loans and discounting bills and facilitating transmission of remittances from one place to another.”-Imperial Dictionary

Now I present you various definitions of Dictionary:

Dictionary of Banking and Finance says-

“ A  bank is an organization chartered by the state or federal govt. principal functions of which are :

iii) To discount notes, make loans and invest in govt. or other securities.

vii) When authorized by the chartering govt. it may act in a fiduciary capacity.

“Bank is an institution where money is received for custody and returned on demand.”

“A bank is an institution for the custody and investment of money.

“A bank is an establishment which trades in money, an establishment for deposit, custody and issue of money and also for granting loans and discounting bills and facilitating transmission of remittances from one place to another.”-

Now I present you various definitions of Encyclopedia:

New Encyclopedia Britanica  “A commercial banker is a dealer in money in substitutes for money, such as cheques or bill of exchange.”

The New Oxford Encyclopedic Dictionary says “Establishment for custody of money, which it pays out on customers order”

The Macmillan Family Encyclopedia says “Commercial banks usually just called banks, can be defined as institutions that provide checking accounts to the public and have the substantial proportion of their assets invested in loans and general business firms.”

1) “Banker includes a body of a person, whether incorporated or not, who carry on the business of banking”-English Bills of Exchange Act-1982

2) “ A bank, it implied, is an instrument of society having functions what make it, in effect, a financial reservoir receiving streams of currency from any direction and from which their issue out following streams where and as required to sustain and fructify or assist commercial, industrial or other enterprises or ventures.”- The high court of Australia.

3) “A bank is a person or corporation carrying on bonafide banking business.” – English Finance Act, 1915

4) “Banker includes a person, or corporation, or a company acting as a banker” – Negotiable Instrument Act, 1881

1) “ A bank performs an essentially distributive task, service or acts as an intermediary between borrowers and lender sense, however, a bank can be considered the heart of a complex financial structure.” – American Institute of Banking.

Now I discuss the Objectives and importance of Bank

Bank has various objectives as per other financial organizations. But banking organization viewpoint is exceptional than others. The objectives of a bank can be viewed from three different perspectives:

1) The objective from the viewpoint of Bank owners,

2) The objective from the viewpoint of the government and

3) The objective from the viewpoint of Bank customers.

The objective from the viewpoint of Bank owners

i) Earning profit: Profit motive of the owners of the Bank acts as a driving force in engaging themselves in the business of banking like all other business.

ii) Rendering Services: Bank renders various services to society as a part of their social commitment and this is a prime objective for engaging in the banking business. Bankers are not only to make the profit but also to do some good for the society.

iii) Investment of fund: The owners of the bank treat the bank as a suitable sector to invest their accumulated saved money.

iv) Earning goodwill: The owners of the bank take a bank as a way of earning goodwill by enhancing the periphery of their banking business.

v) Raising efficiency: The owners sharpen their managerial skill and efficiency by ensuring the smooth operation of their banking business.

The objective from the viewpoint of the government

i) Issuance of Note and currency notes: Government issues notes and currency as a medium of exchange through banks.

iv) Control of money market: Bank by its various products help in controlling money market (supply of money in the market) and guards against the economy to be inflated.

The objective from the viewpoint of bank customers

ii)Custodian of public money: Sometimes the bank acts as a financial adviser and counselor to its customers in various aspects.