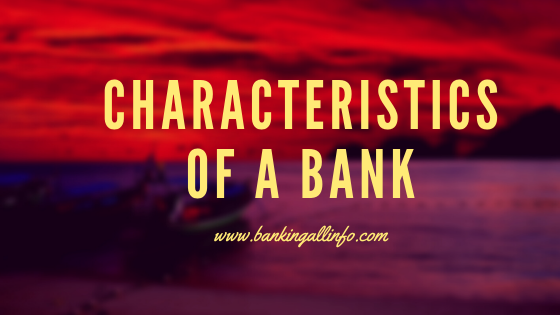 1. Dealing in Money
Bank is a financial institution which deals with other people’s money i.e.
money given by depositors.

A bank is a person or firm or a company. A banking company means a
company where the business of banking.

A bank lends/invests/advances out money in the form of loans to those who require it for different purposes.

A bank provides various banking facilities to its customers. They include
general utility services and agency services.

7. Profit and Service Orientation
A bank is a profit generating institution having service-oriented approach.

8. Ever increasing or maximizing Functions
Banking is an evolutionary concept. There is continuous expansion and
diversification as regards the functions, services and activities of a bank.

9. Connecting Link
A bank acts as a connecting link between borrowers and lenders of money.
Banks collect money from those who have surplus money and give the same to those who are in need of money.

10. Banking Business or jobs
A bank’s main activity to do business of banking which should not be
subsidiary to any other business.

11. Name characteristics
A bank should always add the word “bank” to its name to enable people to
know that it is a bank and that it is dealing in money or substitutes.