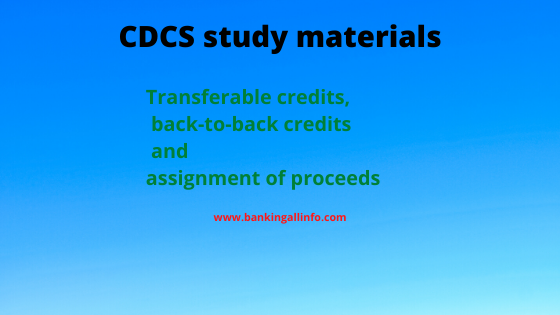 Transferable documentary credits are one of the more common types of documentary credit. There are a number of similarities with (and differences to) back-to-back documentary credits, which are reviewed in section 19.2.
In its simplest form, a documentary credit is issued in favour of the seller (beneficiary), which ships the goods, presents the stipulated documents and claims payment. This scenario is particularly applicable if the beneficiary is the manufacturer or producer of the goods. In some cases, however, an applicant will conduct business with an intermediary trader, agent or middleman (referred to hereafter as trader) who obtains the goods from one or more other sources. In this event, the trader will need to buy the goods or make arrangements for their purchase before supplying them to the applicant.

Typically, a trader will operate on narrow margins. It does not carry a stock of goods and often has limited working capital. A trader will therefore seek a means of financing the purchases in a manner that does not place a burden on its own resources. 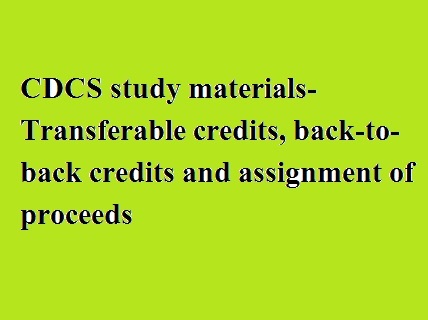 In the context of a standby letter of credit, the underlying debt obligation is often sold, necessitating the transfer of the documentary credit to the new owner of the debt.

19.1.1 The basic features of a transferable documentary credit

19.1.2 The risks and costs of transferable documentary credits

A transferable documentary credit can involve extra risks and costs for the original applicant (the buyer for which the goods are destined). In particular, it accepts the risk of receiving goods from a third party, whom it may not know and with whom there may have been no previous business dealings.
Moreover, once a documentary credit is transferred, more parties are involved. This means that the documents have to be examined and, possibly, mailed twice before they reach the issuing bank. This increases the risk of delay, loss and error along the way.
The greater difficulties involved in controlling the operation under a transferable documentary credit may also increase the risk of fraud. A large part of this risk ultimately falls on the original applicant, which undertakes to reimburse the issuing bank provided that a complying presentation has been made.
Additional costs arise because of the difference between the price paid by the trader and the price that the trader charges to the applicant.

As a consequence of these features, a number of challenges may arise, and a transferring bank and issuing bank should have in place detailed procedures to manage them.

◆◆ It can prove difficult to monitor advices of amendments to the transferable documentary credit and the transferred documentary credit through the chain of the applicant, first beneficiary and one or more second beneficiaries. The monitoring of the necessary consents might also cause concern. However, it should be noted that UCP 600, sub-article 38(f), allows for each transferred credit to be amended individually and that the acceptance or rejection of an amendment by one-second beneficiary does not bind any other second beneficiary to the same course of action.

◆◆ The bank of the second beneficiary might dispatch documents directly to the issuing bank, causing problems for the transferring bank and first beneficiary.

◆◆ If there are discrepancies in the documents, it may prove difficult to obtain the second beneficiary’s and first beneficiary’s agreement to an agreed course of action.

The following steps can be taken to address some of these risks or problems.
◆◆ The issuing bank can restrict honour or negotiation and transfer to a single nominated bank. While a beneficiary and applicant may be reluctant to agree to such an arrangement, the question that the issuing bank should ask itself is whether it wishes to be exposed to the greater risk inherent in any alternative arrangement and to what extent, if any, the applicant would agree to indemnify the bank for doing so…..