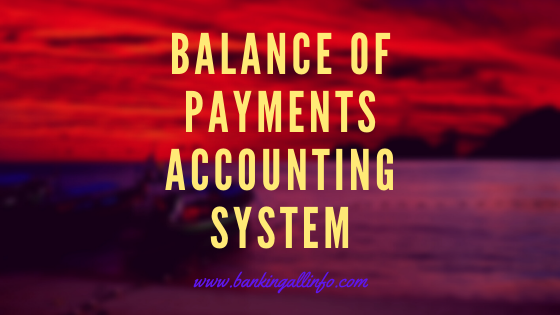 Definition of Balance of payments accounting system: Each year, countries purchase trillions of dollars goods, services and assets from each other. The balance of payment accounting system is a double-entry bookkeeping system designed to measure and record all economic transactions between residents of one country and residents of all other countries during the particular time period. It helps policy makers understand the performance of each country’s economy in international markets. It also signals fundamental changes in the competitiveness of countries and assists policy makers in designing appropriate public policies to respond to these changes.

1. BOP statistics help identify emerging markets for goods and Services.
2. They can warn of possible new policies that may alter a country’s business climate, thereby affecting the profitability of a firm’s operations in that country For example. sharp rises in a country’s imports may signal an overheated economy and portend a tightening of the domestic money supply. In this case, attentive business people shrink their inventories in anticipation of a reduction in customer demand.
3. They can indicate reductions in a country’s foreign-exchange reserves, which may mean that the country’s currency will depreciate in the future. Exporters to country may find that domestic producers will become more price competitive.
4. As was true in the international debt crisis, BOP statistics can signal increased riskiness of lending to particular countries.

The Major Components of  the BOP Accounting System:

The BOP accounting system can be divided conceptually into four major accounts. The first two accounts—the current account and the capital account—record purchases of goods, services, and assets by the private and public sectors. The official reserves account reflects the impact of central hank intervention in the foreign-exchange market. The last account—errors and omissions—captures mistakes made in recording BOP transactions.

The services account records sales and purchases such services as transportation , tourism, medical care, telecommunications, advertising, financial services, and education. The sales of a service to another country is a service export, and the purchase of a service from another country  is a service import.( The British use the term trade in visible to denote trade in services.). For example, for Germany, a German student spending a year studying  at Sorbonne in Paris in a import of services, and the telephone call home that an Italian tourists make during the Oktoberfest in Munich represents a service export.The difference between a country’s export of services and its import of services is called balance of services trade.

The third type of transaction recorded in the current account is investment income. Income German residents earn from their foreign investment is viewed as export of the services of capital by Germany. This income takes the form of either interest and dividends earned by German residents on their investments in foreign stocks, bonds, and deposit accounts or profits that are repatriated back to Germany from incorporated subsidies in other countries that are owned by German firms.On other other hand, foreigners also make investments in Germany. Income earned by foreigners from their investments in Germany is viewed as an Import of the services of capital by Germany. This income includes interest

and dividends paid by firms in Germany on stocks, bonds, and deposit accounts owned by foreign residentsas well as profits that are repatriated by foreign -owned incorporated subsidiaries in Germany back to their corp rate parents.

The current account balance measures the net balance resulting from merchandise trade, service trade, investment income, and unilateral transfers. It is closely scrutinised by government officials and policymakers because it broadly reflects the country’s current competitiveness in international markets.

Capital Account. The second major account in the BOP accounting system is the capital account, which records capital transactions—purchases and sales of assets—between residents of one country and those of other countries. Capital account transactions (summarised in Table# 2), can be divided into two categories: foreign direct investment (FDI) and portfolio investment.

FDI is any investment made for purpose of controlling the organisation in which the investment is made, typically through ownership of significant blocks of common stock with voting privileges. Under U.S. BOP accounting standards,control is defined as ownership of at least 10 percent of a company’s voting stock.

In foreign banks or by foreigners in domestic banks; trade deposits from international commercials customers; and banks short terms international lending activities, such as commercial loans, Long-terms portfolio investments are stocks. bonds, and other financial instruments issued by private and public organisation that have maturities greater than one year and that are held for purposes other than control. For example. when IBM invests excess cash balances overnight in a Paris bank to earn a higher Interest rate than it could earn in New York, it is making a short-term portfolio investment. When the California Public Employers Retirement System Pension Fund buys stock in British Airways it is making a long-term portfolio investment. When British Airways purchases 23
percent of the common stock of US Air. it is making an FDI.

Current account transactions invariably affect the short-term component of the capital account. Why? Well, as noted earlier in the chapter, the first entry in the double-entry BOP accounting system involves the purchase or sale of some thing—a good. a service, or an asset. The second entry typically records the payment or receipt of payment for the thing bought or sold. In most cases, this second entry involves a change in someone’s checking account balance, which in the BOP accounting system is a short-term capital account transaction. “Building
Global Skills” at the end of this articles  walks you through this linkage between the current account and the capital account in more detail.

Capital inflows are credits in the BOP accounting system. They can occur in two ways:

Capital outflows are debits in the BOP accounting system. They also can occur in two ways:

a check drawn on its account at a Hawaii bank to pay its fuel supplier at Honolulu Airport. In both cases, foreigners are liquidating a portion of their US. Assets.

Table BOP # 3 summarises the impact of various capital account transactions on the BOP.

Official gold holdings are normally valued using prices determined in the London gold market. Convertible currencies are  currencies that are freely exchangeable in world currency markets. The convertible currencies most commonly used as official reserves are the U.S. dollar. the Deutsche mark, and the yen. The last two types of reserve-SDRs and reserve position (quotas minus IMF borrowings) at the IMF-were discussed earlier.

However, the equality is never achieved in practice because of measurement errors. The account is called errors and omissions is used to make the BOP balance in accordance withe the following equation:

The errors and omissions account can be quite large. In the chaotic year 1990, for example. the U.S. errors and omissions account totalled a record $73 billion, Experts suspect that a large portion of the errors and omissions account balance is due to under reporting of capital account transactions. Such innovations instantaneous, round-the-clock foreign_exchange trading. sophisticated monetary swaps and hedges. and international money-market funds have made it difficult for governmental statisticians to keep up with the growing volume of legal short-term
money flowing between countries in search of the highest interest rate. Sometimes, errors and omissions are due to deliberate actions by individuals who are engaged in illegal activities such as drug smuggling, money laundering, or evasion of currency and investment controls imposed by their home governments. Politically stable countries, such as the United States. are often the destination of flight capital money sent abroad by foreign residents seeking a safe haven for their assets hidden from the sticky fingers of their home governments. Given the often illegal nature of flight capital. persons sending it to the United States often try to avoid any official recognition of their transactions. For example. after Alberto Fujimori elected president of Peru in July 1990, an estimated $600 million of previously unreported flight capital was repatriated back ‘to Peru as citizens’ confidence in their economy was restored.Similarly, in the early l990s governmental statisticians estimated that as much as $15 billion worth of U.S. dollar bills were tucked under mattresses of Middle Easterners and Eastern Europeans distrustful of their own currencies. Much of this hoarding would go unreported in the U.S. BOP
accounts.Germany faced a similar problem in 1991. when the former Soviet Union and former Yugoslavia were breaking up politically. The Bundeshank became alarmed, fearing increased inflation, because cash in circulation was expanding at 8.5 percent annually. Yet much of the increased holdings o f Deutsche marks was later attributed to their use by Soviet and Yugoslavian citizens distrustful of their own currencies in politically chaotic times. Some errors may crop up in the current account as well. Statistics for merchandise imports arc generally thought to be reasonably accurate because most countries’ customs services scrutinise imports to ensure the all appropriate taxes arc collected. This scrutiny generates paper trails that facilitate the collection of accurate statistics. However, few countries tax exports, so customs services have less incentive to assess the accuracy of statistics concerning merchandise exports.

Statistics for trade in services also may contain inaccuracies. Many Services trade statistics are generated by surveys.For example, U.S. tourism exports are measured by surveying foreign tourists on how many days they spent in the United States and how many dollar they spent per day.If tourists underestimate their daily spending, then U.S. service exports are underestimated. To help the gain a better understanding of the BOP accounts.We next review the international transactions of the United States in 1993.